Revolutionary War – The Battle of Saratoga 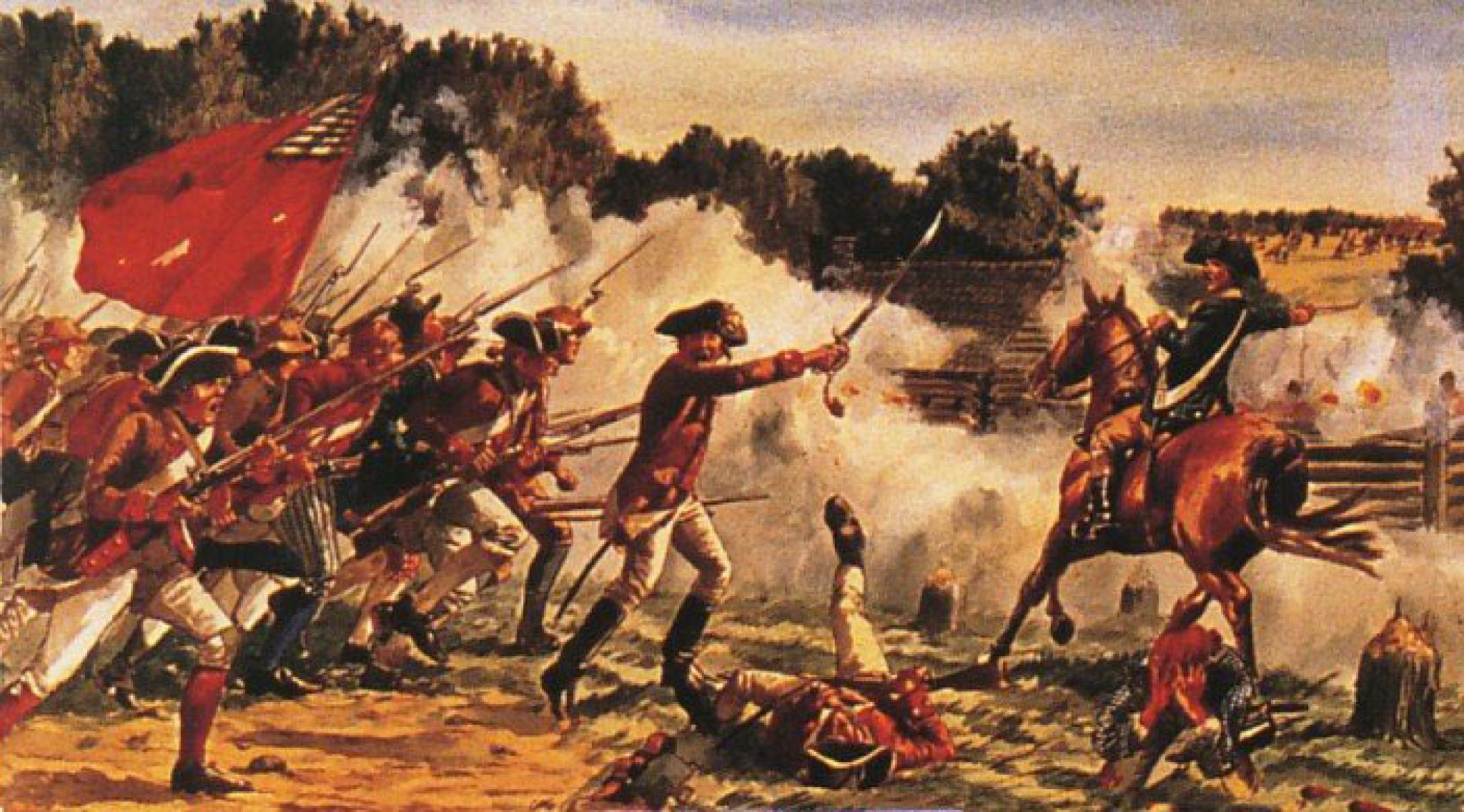 The road to the American Revolutionary War – or War of Independence – began in the wake of the French and Indian War (1754 – 1763) when the government of King George III of Great Britain decided that the American colonies should share in the costs associated with the War by adding taxes to common goods, such as sugar, molasses and tea.

These attempts were met with increasingly stiff resistance. American colonists claimed they were unconstitutional, suggesting that they deserved to have representation in the British Parliament if they were to shoulder some of the war costs. Taking a harsh response, the British instead used their military to allow their representatives to safely perform their tax collection and other duties.

At the time, the loyalties among the colonists were divided. Historians estimate that one-third of colonists supported the American Revolution, one-third sided with the British, and one-third remained neutral about breaking away from British rule.

Background of the Revolutionary War

It was the passage of the Tea Tax in 1773 that resulted in the first revolutionary act; Boston colonists masquerading as Native Americans boarded merchant ships and tossed their cargo and tea overboard. In response, the British Parliament passed a series of punitive laws in 1774, which the American Patriots named ‘Intolerable Acts,’ closed Boston Harbor, and sent in troops to occupy Boston. The Patriots responded by setting up a shadow government that took control of the province outside of Boston. Twelve other colonies supported Massachusetts, forming a Continental Congress to coordinate their resistance and set up committees and conventions which effectively seized power from the royal governments. Most Colonialists were uncertain of what was going to happen next.

In April 1775, fighting broke out between Massachusetts militia units and British regulars at Lexington and Concord. By the following summer, the rebels were waging a full-scale war for their independence that lasted eight years from 1775 to 1783.

The Continental Congress appointed General George Washington to take charge of militia units besieging British forces in Boston, forcing them to evacuate the city in March 1776. Congress then created the first-ever Continental Army and placed Washington in command. He was also given the responsibility of coordinating state militia units.

In mid-June 1776, a five-man committee, including Thomas Jefferson, John Adams, and Benjamin Franklin, was tasked with drafting a formal statement of the colonies’ intentions. Congress formally adopted the Declaration of Independence – written largely by Jefferson – in Philadelphia on July 4, 1776, a date now celebrated as the birth of American independence. Later that month, the Continental Congress formally declared independence from British rule.

Following these actions, support for the Revolutionist grew to about 40 to 45 percent of the colonial population. About 15 to 20 percent of the population still supported the British Crown, however. Known as Loyalists, they fielded perhaps 50,000 men during the war years in support of the British Empire.

To strengthen their forces, the British hired about 30,000 German mercenaries, popularly known in the colonies as “Hessians.” They made up about one-third of the British troop strength in North America. By 1779, the number of British and German troops stationed in North America was over 60,000.

Since native lands were threatened by expanding American settlement, most Native Americans also joined the fight against the United States. An estimated 13,000 warriors fought on the British side.

By June 1776, with the Revolutionary War in full swing, a growing majority of the colonists had come to favor independence from Britain. It was during that same month that the British government – determined to crush the rebellion – sent a large fleet, along with more than 34,000 troops to New York.

In the cities, the British had an advantage due to its naval superiority to capture and occupy coastal cities. In August 1776, this enabled Gen. William Howe’s Redcoats to rout the Continental Army on Long Island, forcing Gen. George Washington to evacuate his troops from New York City by September. Pushed across the Delaware River, Washington fought back with a surprise attack in Trenton, New Jersey, on December 26, 1776. It won another victory at Princeton to revive the rebels’ flagging hopes before making winter quarters at Morristown.

British Tried to Put an End to the Revolutionary War

In a plan to change the fortunes of war, the British attempted to strategically control Upstate New York and isolate New England from the Southern colonies in an effort to decisively put an end to the Revolution. The British strategy involved three main prongs of attack aimed at separating the Revolutionists from New England, where they enjoyed their greatest support by taking control of New York City, Albany, and the Hudson River. First, British Gen. John Burgoyne would lead 8,000 troops from Canada. Barry St. Leger would direct his troops east from Lake Ontario along the Mohawk River valley, and Gen. Howe would move his troops north from New York City, where all three would meet at Albany to destroy the Rebel armies caught in the middle.

In June, Burgoyne moved south from Canada, boated up Lake Champlain to middle New York, then marched over the divide and down the Hudson Valley to Saratoga, some 188 miles distance. On the way, Burgoyne’s men dealt a devastating loss to the Americans in July 1777 by retaking Fort Ticonderoga.

However, what Burgoyne didn’t know was Howe’s decision not to move north to Albany but rather to takes his forces southward from New York to confront Washington’s army near the Chesapeake Bay.

Howe was successful in defeating the Americans at Brandywine Creek, Pennsylvania, on September 11, 1777, and entered the Patriot capital of Philadelphia on September 25. Although he succeeded in capturing the city and forcing Congress to flee to York, Pennsylvania, he decided to camp his army in the capital for the winter, rather than proceeding with the plan of joining forces with Burgoyne and St. Leger at Albany.

By the time Burgoyne reached Fort Edward, supplies were running low, so he sent a detachment to capture an American supply base at Bennington, Vermont. The detachment was attacked and defeated by John Stark and the Green Mountain Boys, costing Burgoyne a thousand men.

It was right around this time that another problem arose.

Before the Battle of Saratoga

On the morning of July 27, 1777, a loyalist by the name of Miss Janes McCrea visited a friend, Sarah McNeil, who was preparing to leave Fort Edward for safety. About noon the two women were captured by some Native American scouts whom Burgoyne had employed as an advance force. McNeil was delivered safely to British hands, but McCrea was later discovered dead, several bullet wounds in her body and scalped. The culprits took the scalp back to Burgoyne. The murder and scalping sent a shock of horror through the colonies; it was even felt in England, wherein the House of Commons Edmund Burke denounced the use of “Indian” allies.

In America, the deed galvanized patriotic sentiment, swung waverers against the British, and encouraged a tide of enlistments that helped end Burgoyne’s invasion.

Burgoyne’s advance south was slow and began to falter in the forests near the Lake George area. Colonist troops under the command of Gen. Horatio Gates were chopping down trees and blocking Burgoyne’s path, slowing the British considerably. Small and numerous scrimmages forced Burgoyne to fall back to the vicinity of Saratoga. At the same time, Gen. Benjamin Lincoln, a Virginian patriot, had gathered a group of about 750 men to fight the British from the back. By picking off the British ranks from behind trees, they weakened Burgoyne’s army considerably.

The situation was growing desperate for Burgoyne when he received a letter from Gen. Henry Clinton learning of Howe’s change in plans of meeting at the Hudson River. In the letter, Clinton promised he was coming up the Hudson with reinforcements from New York. Unfortunately, the furthest north Clinton would reach was Clermont, nearly 50 miles from Albany and 70 from Bemis Heights.

As time passed, Burgoyne realized Clinton would never arrive on time with reinforcement, so he decided he could wait no longer to attack the colonialists. He was already forced to put his men on limited rations, and he did not want to surrender to the Americans, whom he considered almost conquered. With the forces he had left, he began his offensive.

The battle of Saratoga, the Battle of Freeman’s Farm, took place on September 19, 1777. A militia of sharpshooters from Virginia harassed the British, while other colonist forces aggressively charged into battle with them. Officially the British won the fight but weakened Burgoyne forces since he lost two men for everyone on the American side.

The second battle, the Battle of Bemis Heights, occurred on October 7, when Burgoyne determined to break free from the encircling colonial forces and drive them from the field. The British troops and their German allies were devastated and nearly lost their entrenched positions.

The Battle of Bemis Heights Forced Burgoyne to Withdraw North

This defeat at Bemis Heights forced Burgoyne to withdraw north to camps in and around the present Village of Schuylerville. Burgoyne surrendered on October 17, 1777. Disgraced, Burgoyne returned to England and was never given another command.

The American victory in the Battle of Saratoga would also prove to be a turning point of the American Revolution, as it prompted France, which had been secretly aiding the rebels d been secretly aiding the rebels since 1776 to enter the war openly on the American side. However, it would not formally declare war on Great Britain until June 1778. Spain and the Netherlands also joined as allies over the next two years. The American Revolution, which had begun as a civil conflict between Britain and its colonies, had become a world war.

Although the Revolutionary War persisted on the high seas and in other theaters, the French involvement proved decisive, with a French naval victory in the Chesapeake leading to British Gen. Charles Cornwallis surrendered at Yorktown to the Gen. George Washington on October 19, 1781, effectively ending the War for Independence.

If you enjoyed learning about The Battle of Saratoga during the Revolutionary War, we invite you to read about other battlefield chronicles on our blog. You will also find military book reviews, veterans’ service reflections, famous military units and more on the TogetherWeServed.com blog.  If you are a veteran, find your military buddies, view historic boot camp photos, build a printable military service plaque, and more on TogetherWeServed.com today.