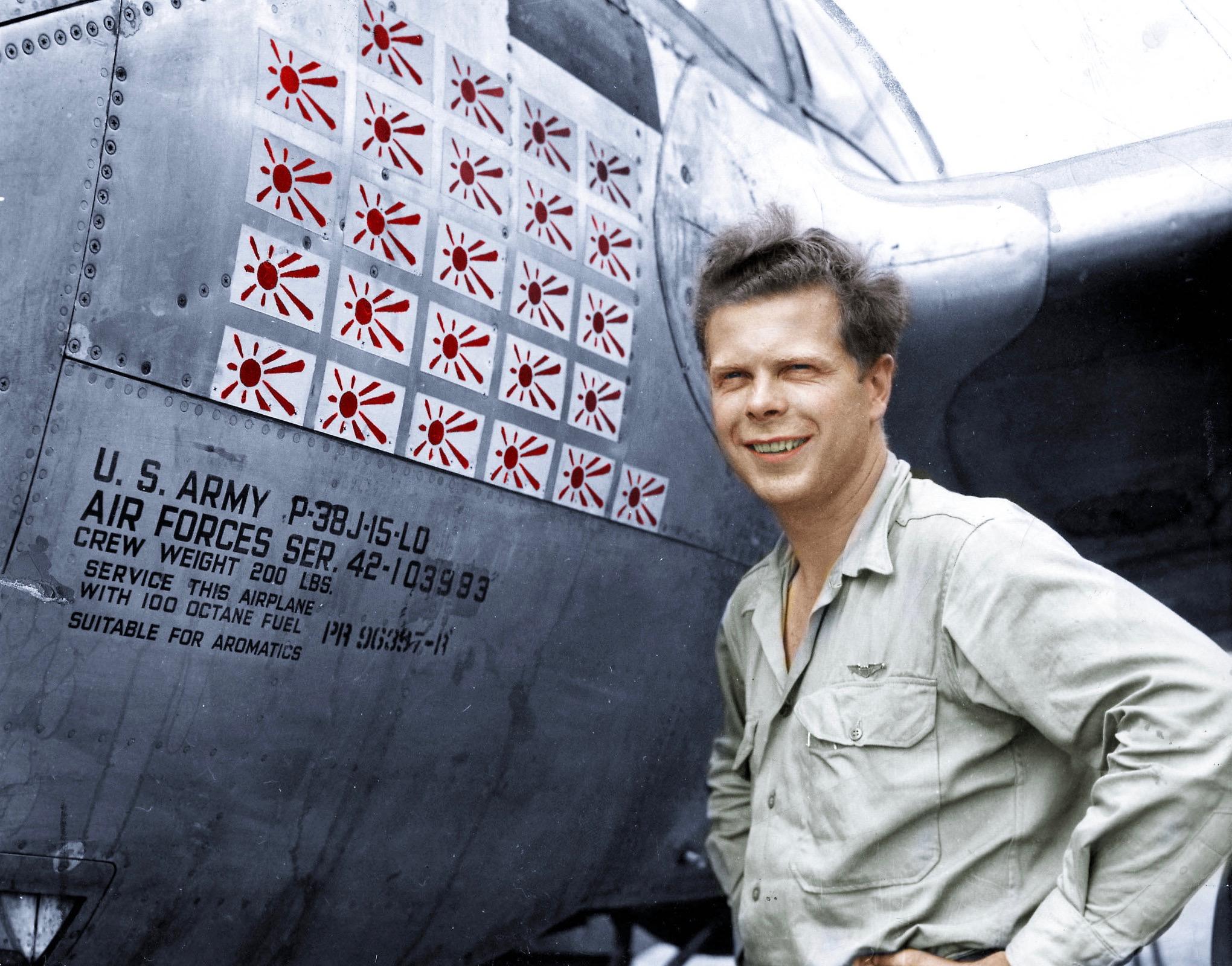 Richard Ira “Dick” Bong, was born September 24, 1920, in St. Mary’s hospital in Superior, Wisconsin. He was the first of nine children born to Carl T. Bong and Dora Bryce Bong, living on a farm near the small town of Poplar, Wisconsin, about 20 miles southeast of Superior. Dick’s father came to the United States from Sweden at the age of seven, and his mother was of Scots-English descent. Dick grew up on the family farm and attended the Poplar Grade School. Richard Bong then attended the Poplar High School, which consisted of only three grades. Consequently, he completed his senior year at the Superior Central High School in 1938 by commuting 44 miles round-trip.

Bong’s interest in aviation began in 1928 when President Coolidge was vacationing near Superior and established a summer White House in the Superior High School. His mail was delivered to him daily by an airplane. Dick was fascinated. Later, he recalled that the mail plane “flew right over our house, and I knew then that I wanted to be a pilot.” Soon he was spending countless hours building model planes.

Following graduation from Superior Central High School, he entered Wisconsin State Teachers College. Determined to be a pilot, he enrolled in the college’s government-sponsored Civilian Pilot training program. He took flying lessons in a Piper J-3 Cub and earned his private pilot license. After two and a half years of college, he enlisted in the Army Air Corps Aviation Cadet Program in early 1941. He entered service at Wausau, Wisconsin, on May 29, 1941, and was sent to the Rankin Aeronautical Academy, a primary flight school near Tulare, California, where he soloed in a Steerman biplane trainer on June 25, 1941.

He took his basic flight training in a BT-13 at Gardner Field near Taft, California. Then he was sent to Luke Field near Phoenix, Arizona, for advanced single-engine pilot training in an AT-6 Texan. His gunnery instructor at Luke was Captain Barry Goldwater, who later said, “I taught him fighter gunnery. He was a very bright student.” But the most important thing came from a P-38 check pilot who said Bong was the finest natural pilot he ever met. “There was no way he could keep Bong from not getting on his tail, even though he was flying an AT-6, a very slow airplane.”

After he received his wings at Luke Field, Arizona, on January 9, 1942, Lt Bong, spent three months as an instructor at Luke. On May 6, 1942, he was transferred to Hamilton Field near San Francisco, for aerial combat training in the twin-engine, twin-tail P-38 Lightning fighter.

It was at Hamilton that Bong first raised the ire and the admiration of Maj. Gen. George C. Kenney, commanding General of the Fourth Air Force. The field’s location resulted in some aerial antics by Bong, such as “looping the loop” around the center span of the Golden Gate Bridge in his P-38, and waving to stenographers in office buildings as he flew along Market Street. But more serious was his blowing clean wash off a clothesline in Oakland. That was the last straw for Kenney, who chewed him out and told him, “Monday morning, you check this address out in Oakland, and if the woman has any washing to be hung out on the line, you do it for her. Then you hang around being useful – mowing the lawn or something – and when the clothes are dry, take them off the line and bring them into the house. And don’t drop any of them on the ground, or you will have to wash them all over again. I want this woman to think we are good for something else besides annoying people. Now get out of here before I get mad and change my mind. That’s all.”

Richard Bong Was the Top-Scoring U.S. Ace during WWII

Assigned to the 9th Fighter Group, in Brisbane, Australia, he was sent shortly afterward to Port Moresby, New Guinea, where he was temporarily attached to the 39th Fighter Squadron, 35th Fighter Group. There, two days after Christmas, he scored his first victories, downing a Val and a Zeke over Dobodura. By January 1943, he was an ace, his fifth victory an Oscar over the Anon Gulf.

Flying the P-38 Lightning in the Pacific theater Maj. Richard Bong was the top-scoring U.S. Ace during WWII with 40 kills.

A skilled flyer, Bong was noted for his silent approaches to his airfield with both engines feathered. As he swooped over the field, he would loop his P-38 and land.

He claimed to have poor gunnery skills (this was far from the truth in that he was so good at gunnery that his commanding officer had him remain at Luke as an instructor for several months) for which he compensated by closing on his targets until he was nearly touching them. After he topped Eddie Rickenbacker‘s WWI record of 26 kills, Bong was reassigned to training duties, but he managed to bend the rules and shoot down thirteen more planes.

At Tacloban Airfield on Leyte on December 12, 1944, Dick Bong was awarded the nation’s highest honor by General Douglas MacArthur, Commander of all U.S. Army units in the Far East who, after casting aside a prepared speech, said: “Dick Bong, a hero in an era of heroes, represents a generation of young men and women who willingly left their farms, villages, and cities to defend their country’s freedom. They carried out the work that had to be done – and did it well.”

Bong was the first fighter pilot handpicked by Gen. George C. Kenney in the fall of 1942 for a P-38 squadron designed to strengthen his Fifth Air Force in Australia and New Guinea. Dick Bong loved flying, and the P-38 was the ideal fighting plane for the combat techniques he mastered: swooping down on his targets and blasting them at dangerously close range, then pulling up fast. His own aircraft was damaged in battle in several of his missions, once so badly he had to crash-land.

Gen. Kenney pulled Dick Bong out of combat when his score reached 40 and sent him home to “marry Marjorie and start thinking about raising a lot of towheaded Swedes.” Dick and Marge Vattendahl were married on February 10, 1945, in Concordia Lutheran Church in Superior, an event attended by 1,200 guests and covered by the international press.

The couple honeymooned in California for several weeks where their stops included Hollywood and the Sequoia National Park before reporting to the Flight Test Section of the Air Technical Command at Wright Field (Wright-Patterson Air Force Base in Dayton, Ohio). Dick began training for a new assignment in Burbank, California: testing the plane that would take the Air Force into the jet age – the Lockheed P-80 Shooting Star.

Bong then became a test pilot assigned to Lockheed’s Burbank, California, plant, where he flew P-80 Shooting Star jet fighters at the Lockheed Air Terminal. On August 6, 1945, the plane’s primary fuel pump malfunctioned during takeoff on the acceptance flight of a P-80A. Bong either forgot to switch to the auxiliary fuel pump, or for some reason was unable to do so. Bong cleared away from the aircraft but was too low for his parachute to deploy. His body, partially wrapped in the shrouds of his parachute, was found 100 feet from the plane’s jet engine. The plane crashed into a narrow field at Oxnard St & Satsuma Ave, North Hollywood. His death was front-page news across the country, sharing space with the first news of the Atomic bombing of Hiroshima.

On August 8, 1945, he was buried in the Poplar Cemetery, Poplar, Wisconsin.

He was the recipient of the Medal of Honor.

The Airport at Superior, Wisconsin Was Named the Richard Bong Airport

Major Bong was also honored when the airport at Superior, Wisconsin, was named the Richard Bong Airport. In his hometown of Poplar, there is a Bong Memorial room in the Poplar High School that includes his uniform, all twenty-six of his decorations, photographs, newspaper clippings, and even a fragment of the plane in which he was killed. Outside is mounted a P-38 Lightning fighter, similar to the one he flew.