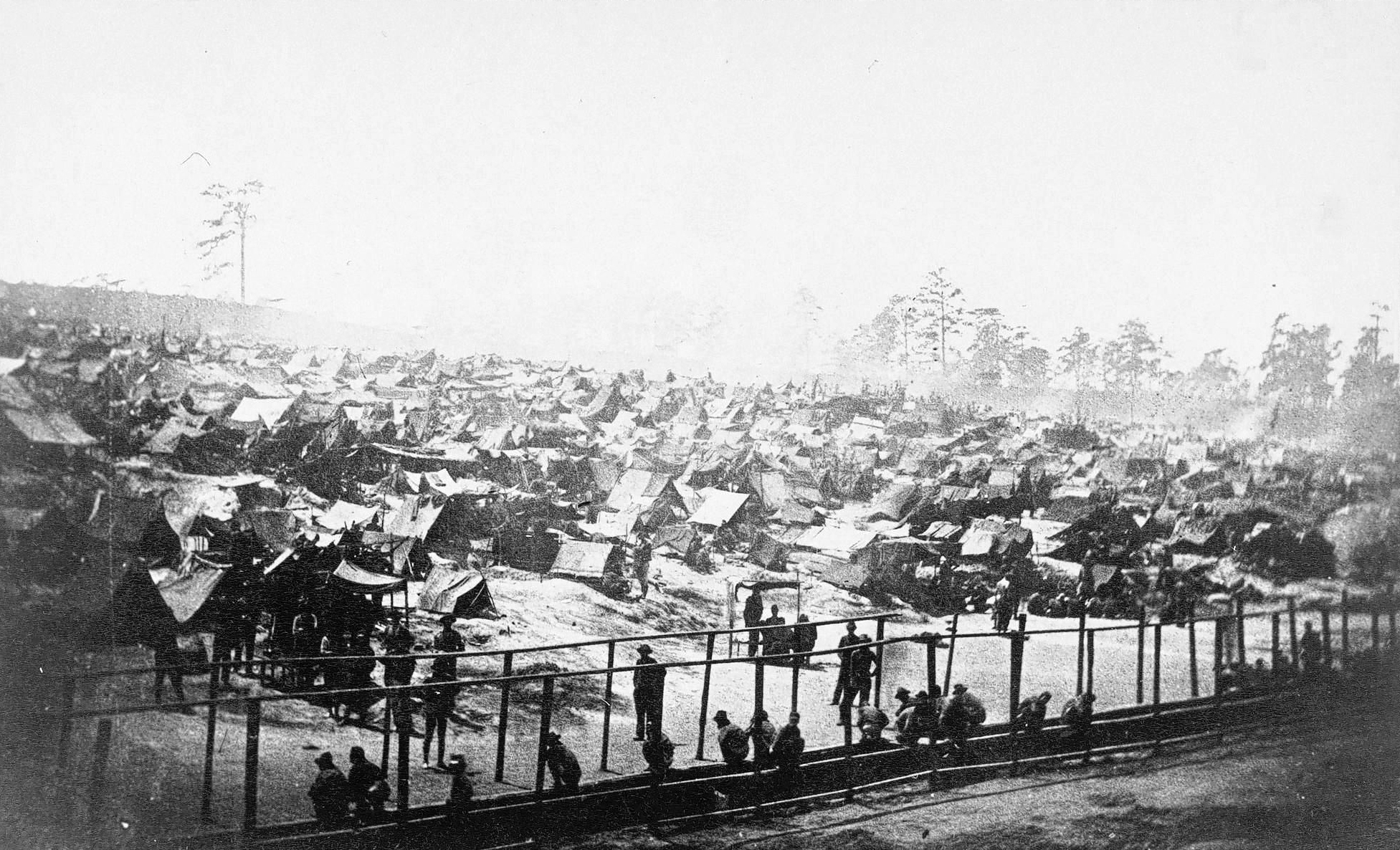 There were 150 prison camps on both sides in the Civil War, and they all suffered from disease, overcrowding, exposure, and food shortages. But Andersonville was notorious for being the worst. Some men agreed to freedom and fought for the South as galvanized soldiers, fearing the dangers of imprisonment to be greater than those of the battlefield.

Officially named Camp Sumter, the most notorious Civil War stockade was hastily constructed in early 1864 near the town of Andersonville in southwest Georgia. The number of Union soldiers held near Richmond had swelled with the breakdown of prisoner exchange agreements, posing a threat to the Confederate capital’s security and taxing Virginia’s already limited resources.

Andersonville Was Jammed with over 32,000, Almost All Enlisted Men

In late February, Federal prisoners began to be transferred to the still-unfinished Georgia facility. By July, Andersonville, built to accommodate up to 10,000 captured soldiers, was jammed with over 32,000, almost all enlisted men. The open-air stockade, enclosed by 20 foot-high log walls, grew to 26 acres but remained horribly overcrowded and conditions became more and more intolerable. Running in the middle of the camp was a stagnant, befouled stream, absurdly named Sweet Water Branch, used as a sewer as well as for drinking and bathing. There were no barracks; prisoners were forbidden to construct shelters, and while some did erect tents and flimsy lean-tos, most were left fully exposed to the elements. Medical treatment was virtually nonexistent.

The Form of Dysentery, Scurvy, Malaria, and Infection at Andersonville Prison

With the South barely able to feed its own men, the prisoners, who were supposed to get the same rations as Confederate soldiers, starved-receiving rancid grain and perhaps a few tablespoons a day of mealy beans or peas.

The poor food and sanitation, the lack of shelter and health care, the crowding, and the hot Georgia sun all took their toll in the form of dysentery, scurvy, malaria, and exposure.

During the summer months, more than 100 prisoners died every day. Others fell victim to thieves and marauders among their fellow captives. The desperate situation led a Confederate medical commission to recommend relocating those prisoners who were not too ill to move, and in September 1864, as William T. Sherman‘s advancing army approached, most of Andersonville’s able-bodied inmates were sent to other camps.

Remaining in operation until the end of the war, Andersonville held more captured Union soldiers than any other Confederate camp, a total of more than 45,000, nearly 30 percent of whom died in captivity. The North had learned of the camp’s appalling conditions well before the emaciated survivors were released in 1865, and outraged citizens urged retribution on Southern prisoners of war.

That was hardly necessary: the Union had its own wretched prison camps, including Elmira, New York, where the death rate approached Andersonville’s, even though the North was far better equipped to cope with captured soldiers. Mismanagement and severe shortages were more to blame for the horrors of Andersonville than any deliberate attempt to mistreat prisoners.

Nevertheless, many Northerners insisted that the abuse was deliberate and demanded vengeance. Consequently, after being tried by a U.S. military court and convicted of war crimes, the prison’s commander, Captain Henry Wirz, was hanged in November 1865 for “impairing the health and destroying the lives of prisoners.” Meanwhile, Clara Barton and other government workers compiled a list of 12,912 prisoners who had died at the camp. Andersonville’s mass graves were replaced by a national cemetery, which is today still used as a burial ground for American veterans.