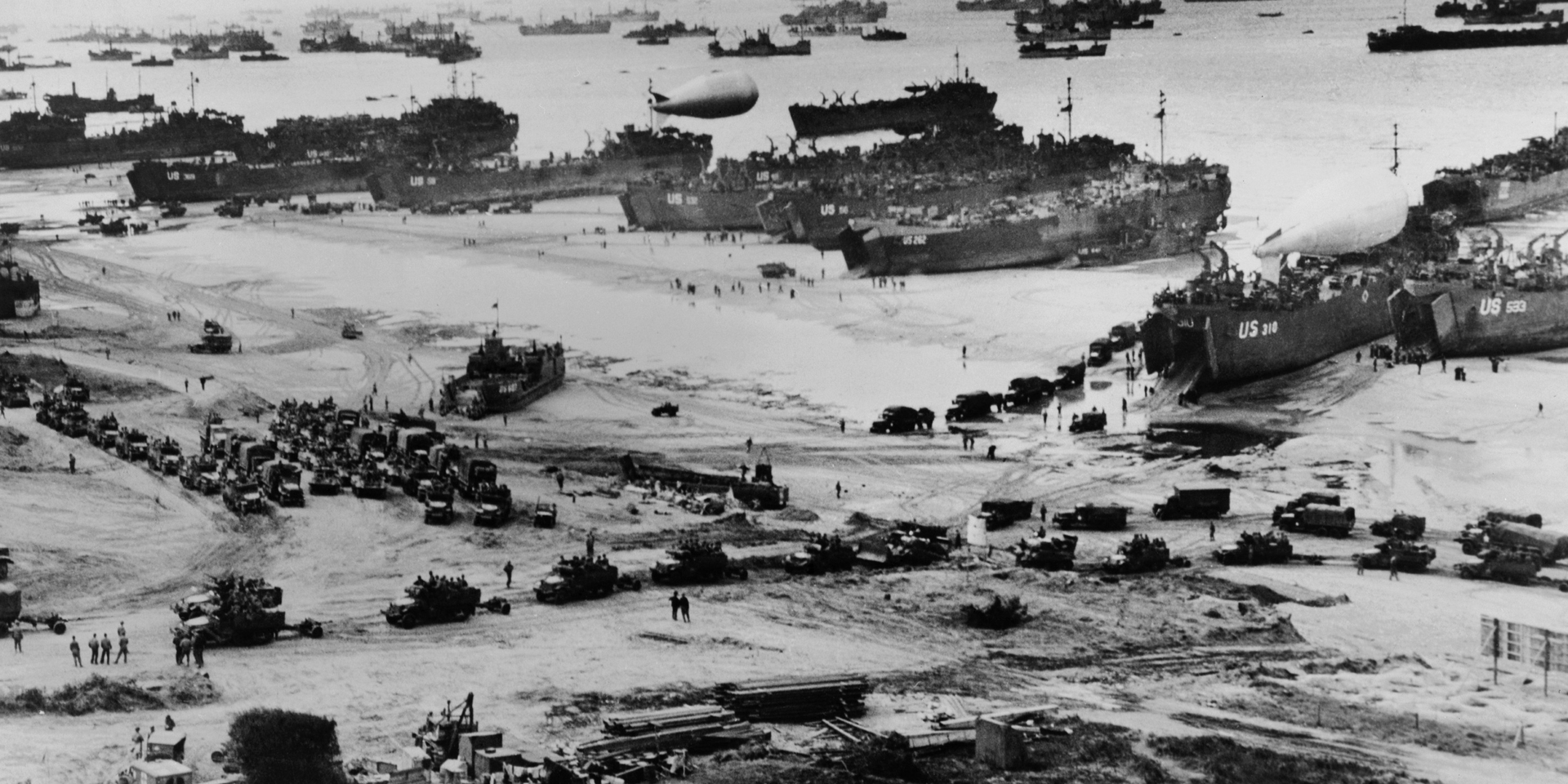 It was a cloudy, breezy morning on Tuesday, June 6, 1944 as the largest seaborne invasion in history began when British, Canadian and American troops set off across the unpredictable, dangerous English Channel from Portsmouth, England. Their destination: the beaches at Normandy, France.

As the 5000-ship convoy carrying over 150,000 men and nearly 30,000 vehicles made its way across the choppy channel, thousands of paratroopers and glider troops were already on the ground behind enemy lines, securing bridges and exit roads. More than 300 planes dropped 13,000 bombs over coastal Normandy immediately in advance of the invasion. Naval guns fired volley after volley on and behind the beaches.

Allied infantry and armored divisions began landing on the coast of France starting at 06:30. They landed under heavy, deadly fire from gun emplacements overlooking the beaches, and the shore was mined and covered with wooden stakes, metal tripods, and barbed wire, making the work of the beach clearing teams difficult and dangerous.

Strong winds also blew the landing craft east of their intended positions, particularly at Utah and Omaha were American troops were to secure. The British and Canadians overcame light opposition to capture beaches codenamed Gold, Juno and Sword, as did the Americans at Utah Beach. Casualties were heaviest at Omaha where American troops faced heavy resistance from heavily entrenched enemy atop the high white cliffs.

Considering the massive size and scope of the attack it went pretty much as planned. But the terrible conditions and enormous challenges of the attack also brought about terrible, fatal, human errors. Hampered by overcast skies, a great number of troop transports overshot their drop zones by miles. Aircraft missed dropping airborne troops in designated drop zones, resulting in scattered units unable to hookup for hours, sometimes days. Troop carrying gliders crashed into obstacles set up by the Germans killing hundreds of paratroopers. Sixty percent of all equipment parachuted in was lost. There was staggering loss of life and limb, yet, in spite of incalculable risks, the invasion succeeded it purpose. Within days more than 100,000 soldiers had begun the slow, hard trek across Europe. By late August 1944, all of northern France had been liberated, and by the following spring the Allies had defeated the Germans. The Normandy landings was the beginning of the end of war in Europe.

Among the American solider to hit the beaches of Normandy were dozens of young men from Bedford, a small southern town in Virginia’s Blue Ridge Mountains with a population of just a little over 3,000. There were thirty-five soldiers of them, all growing up together and as America went to war, so did they. All were in the same Army National Guard Company and in the first wave on Omaha Beach.

The Nation’s Severest Losses On The Longest Day

Of the nearly 4,500 allied soldiers who lost their lives in the bloody battle, nineteen were from Bedford. Later in the campaign, four more boys from this small Virginia town died of gunshot wounds. Proportionally this community suffered the nation’s severest D-Day losses. That distinction and the fact Bedford was representative of all communities, large and small, whose citizen-soldiers served on D-Day, Congress approved the establishment of the National D-Day Memorial there.

This year, the memorial is dedicating a new sculpture to honor the “Bedford Boys” and to recognize a town that, like so many others in our nation, lost their sons and brothers on one day.

On hand was CBS News reporter Jan Crawford who interviewed a number of those who grew up with the 35 Bedford boys. Among them was Lucille Boggess who was 14- years old when her two brothers, Bedford and Raymond Hoback, left home.

“My parents and most all of us went to see them off,” Boggess said. “We were just kind of saying goodbye but, you know, ‘We’ll see you soon.’ And it wasn’t like they weren’t coming back.” But they didn’t. Both brothers are buried in the Normandy American Cemetery on a bluff above the sandy beach were they died.

“We were getting ready to go to church on Sunday, and the sheriff brought the first telegram. The second telegram was delivered by a cab driver,” Boggess said. “Several years after that, my mother had a stroke. And I can remember that we’d be sitting around in the living room at night, and she’d be sitting on the sofa and she’d say, ‘Where are my boys?’ I want to cry telling you that,” Boggess said.

Those in the same rifle company who survived and returned also suffered.

“I try not to think of it anymore,” Allen Huddleston said.

Another Bedford boy who made it home was Sgt. Roy Stevens, who died in 2007. His daughter Kathy said her father and his twin brother, Ray, both landed on the beaches, but only Roy survived. He last saw his brother Ray when they set out for Normandy on different boats. Ray wanted to shake hands with him, and Roy wouldn’t because he said, ‘I’m going to see you when we get to Normandy,’ and ‘course, Ray didn’t make it, he was one of the first ones out,” Kathy said.

“I’ve often thought, ‘Well, if all these men had come back, how would this community be different and what contribution would they have made?’ And I just felt like it would’ve been a better place, and I think that we still sort of cry for them and miss them,” Boggess said.

Understandable, the human cost of “The Longest Day” still casts a shadow over this town, seven decades later.

The biggest ceremony of the day took place at the Normandy American Cemetery and Memorial overlooking the Normandy beach itself. Thousands of people returned to the site of that pivotal battle in this year’s commemorations to mark its 70th Anniversary.

With French and American flags fluttering in a gusty breeze, President Barack Obama, together with French President Francois Hollande, addressed an audience seated against a backdrop of rows upon rows of headstones overlooking the site of the battle’s most violent fighting at Omaha Beach. He described D-Day’s violent scene in vivid terms, recalling that “by daybreak, blood-soaked the water” and “thousands of rounds bit into flesh and sand.”

Sharing the stage with the heads of state were approximately 400 World War II veterans of that fierce battle who traveled long distances to the remote historic site. When Obama recognized them, some removed their hats as the audience delivered a long-standing ovation. While listening to the speeches, almost all reacted with standing applause and emotion, now sitting only miles from where they fought for their lives.

For many veterans who survived the invasion to tell their story this could mark the last for them. With every year that passes, fewer and fewer veterans can muster the strength to return.

So much sacrifice — a debt we can never repay or forget.