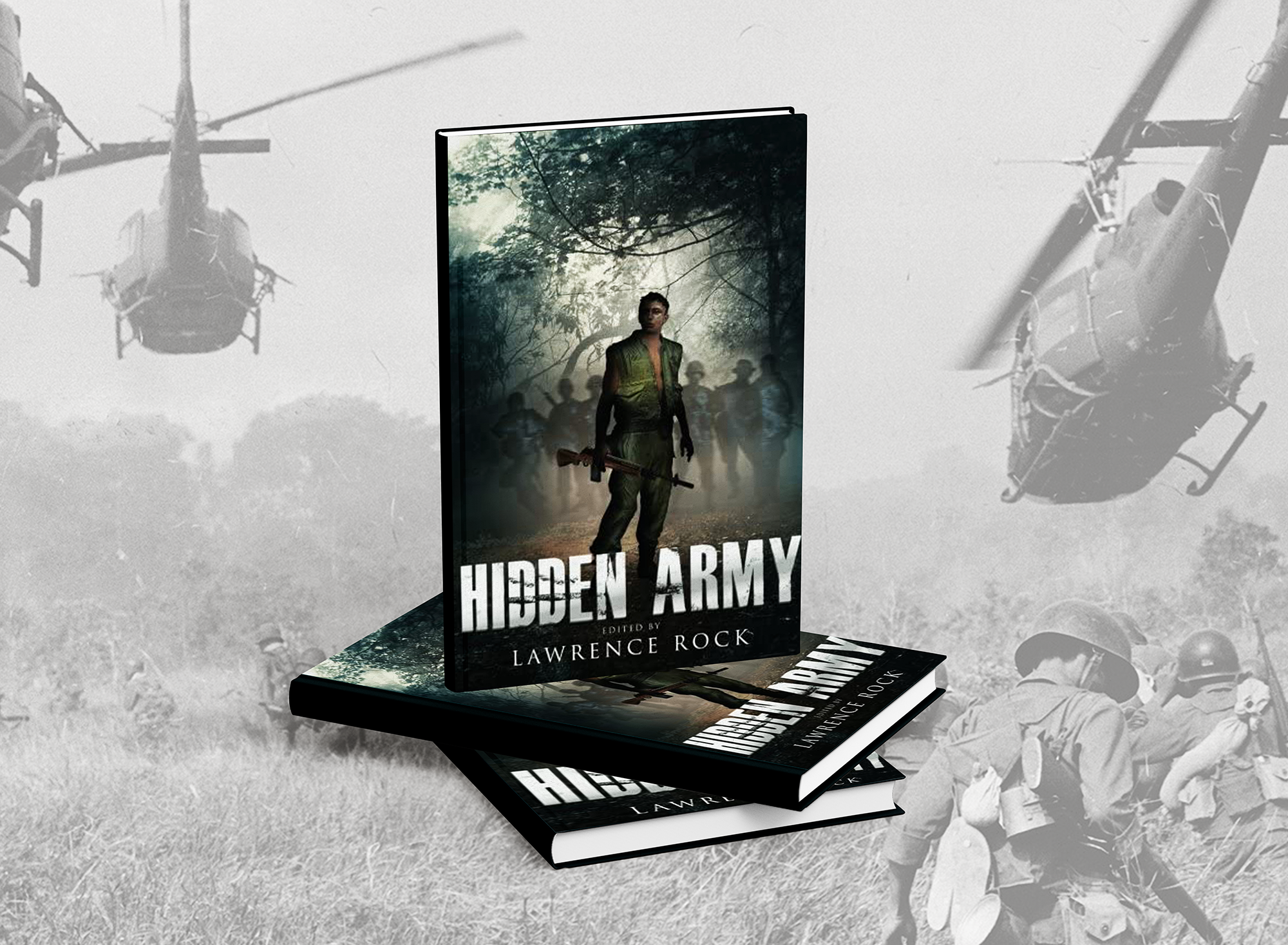 According to Pentagon records, nearly four million personnel served in and around Vietnam; most in Vietnam, others on flight bases in Thailand and ships in adjacent South China Sea. Of those 3,917,400 million men and women ordered to the Southeast Asia Theater, ninety percent were not sent there to fight. They were there to support the ten percent who were.

With no front lines or secure roads, many of these support troops found themselves in combat situations. In fact, a Veteran’s Administration study found that over seventy percent of support troops were directly or indirectly shot at during their tours, and over half saw someone killed or wounded. This was particularly true during the 1968 Tet Offensive.

Hidden Army is the Second of Two Books by Lawrence Rock

Hidden Army is the second of two books containing the oral history of support troops the author interviewed. In both, he brought together and edited the information he skillfully pulled out of the interviewees.

His first effort, The Tooth, and the Tail was released in 2012. To compile as much input as possible for this first book, he interviewed 150 men and women veterans of the war but ended up using only 62 who served in South East Asia from 1958 to 1975. That left many stories untold.

While The Tooth and the Tail was a chronological grouping of detailed accounts of who the support troops were more rather than what they did, Hidden Army – following the same oral history format – focuses more on the types of support while attempting to portray what the specific issues were for each group and how they dealt with them.

Rock guides the reader through the period they are talking about by describing the different phases of the war and the occasional life-threating situations in which they found themselves. He also explains a little something on how the participants – work fits into the overall support scheme. Providing this – blueprint – along with historical information, was very helpful.

Most of the testimonial by the participants is very well presented, and the reader will get a keen sense of the pros and cons of their work and how much the support they provided to the frontline troops made the difference in life and death situations. Participants also described their frustration and triumphs, accomplishments, and regrets. Pride in their support work was obvious in many of the stories.

The truth is if it weren’t for support troops providing the material means to fight the enemy, some of the writers of combat books would not be around.

For any serious reader on the history of the Vietnam War, this book and Rock’s first book deserve their rightful place alongside those dealing with combat tactics and battle strategies. In their totality, both are long-missing critical pieces in the literature of the Vietnam War.

Every page is worth reading.  I highly recommend it to anyone who wants to truly get a sense of how it was in Vietnam for almost 90 percent of us who served as support troops.

As with the first book, I enjoyed reading about the support guys that were there. The stories are real and not the imagination of some writer expressing what he thinks it may have been like. Everyone there had the humorous moments and the gut-wrenching sights that will always haunt them the rest of their life. Thanks, Larry, for bringing the REMF’s to the front

I could not put this down until I finished the entire book. Finally, a book that tells the story of all of the soldiers that did not get the glory of the folks we supported.

Lawrence Rock served in the U.S. Marine Corps from 1964-1967 with a thirteen-month Vietnam War tour in 1965-66 as a clerk and driver with the 1st Marine Air Wing in Danang. He left the Marine Corps as a sergeant. His passion for telling the Untold Story of Support Troops in Vietnam grew with each interview.  Some publishers suggested he write the book himself, but he felt strongly that the voices of the 150 men/women he interviewed had to be heard. As a civilian, he was a market researcher for A. C. Nielsen Company. He is currently retired and lives in Villa Hills, Kentucky.