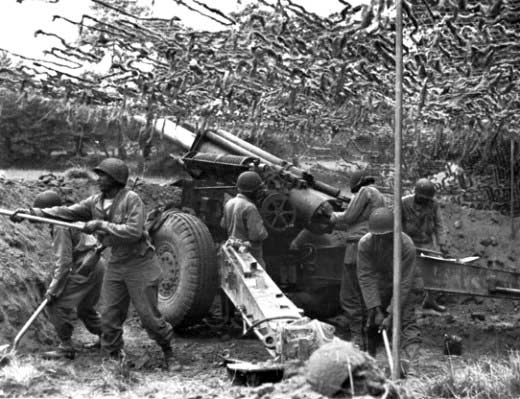 In the early hours of December 16, 1944, Adolf Hitler’s army launched a massive surprise attack on Allied lines across the frozen, forested landscape of Belgium. Caught off-guard, the Americans fell back into defensive positions. For a few desperate days before Christmas, the outcome of the war in Europe hung in the balance.

Desperate battles to stem the German advance were fought at St.-Vith, Elsenborn Ridge, Houffalize, and Bastogne. As the Germans drove deeper into the Ardennes in an attempt to secure vital bridgeheads, the Allied line took on the appearance of a large bulge, giving rise to the battle’s name: Battle of the Bulge.

The brutality rivaled that of the Eastern Front; no quarter was given. Incidents like the Malmedy Massacre became well-known. On the afternoon of December 17, 1944, over 80 GIs who had been taken prisoner were gunned down by men of the 1st SS Panzer Division. Some escaped to spread the story, which led to a steely resolve on the part of American troops.

But later that night, another massacre occurred that received little attention during or after the war.

Shortly after the outbreak of Hitler’s Ardennes Offensive, members of the all-black 333rd Artillery Battalion were just eleven miles behind the front lines. With the rapid advance of the Germans, the 333rd was ordered to withdraw further west. Still, two batteries, Charlie and Service Battery, were ordered to stay behind to give covering fire to the 106th Infantry Division.

On December 17th, the 333rd were overrun with most killed or captured. The remnants of the unit were ordered to Bastogne and incorporated into its sister unit, the 969th Field Artillery Battalion. Both units provided fire support for the 101st Airborne Division in the Siege of Bastogne, subsequently being awarded the Presidential Unit Citation.

Eleven soldiers, however, from the 333rd, were separated from the unit shortly after they were overrun by the Germans. These men wound up in the little Belgian hamlet of Wereth, just 25 kilometers southwest of Malmedy, Belgium, site of another much more well-known WWII atrocity.

At about 3 pm on December 16, 1944, the 11 men approached the first house in the nine-house hamlet of Wereth, owned by Mathius Langer. A friend of the Langer’s was also present.

The men were cold, hungry, and exhausted after walking cross-country through the deep snow. They had two rifles between them. The Langer family welcomed them and gave them food. But this small part of Belgium did not necessarily welcome Americans as “Liberators.” This area had been part of Germany before the First World War, and many of its citizens still saw themselves as Germans and not Belgians.

Word leaked out from a Nazi sympathizer in the area that the men had been sheltered and were hiding in the Langer home. When the SS troops approached the house about 4 pm that day, the eleven Americans surrendered quickly, without resistance. The Americans were made to sit on the road, in the cold, until dark. The Germans then marched them down the road, and gunfire was heard in the night.

In the morning, villagers saw the bodies of the men in a ditch at the corner of a cow pasture. Because they were afraid that the Germans might return, they did not touch the dead soldiers. The snow-covered the bodies, and they remained entombed in the snow until January when villagers directed members of the 99th Division’s I&R platoon to the site.

In the official US Army report, it was revealed that the men had been brutalized, with broken legs, bayonet wounds to the head, and fingers cut off. It was apparent that one man was killed as he tried to bandage a comrade’s wounds.

In 2001, three Belgium citizens embarked on the task of creating a fitting memorial to these men and additionally to honor all Black GIs of World War II. With the help of Norman Lichtenfeld, whose father fought and was captured in the Battle of the Bulge, a grassroots publicity and fund-raising endeavor was begun. The land was purchased, and a fitting memorial was created. There are now road signs indicating the location of the memorial, and the ​​​Belgium Tourist Bureau lists it in the 60th Anniversary “Battle of the Bulge” brochures. The dedication of the memorial was held in 2004 in an impressive military ceremony.

Norman’s Goal is to Make the Wereth 11 and all Black G.I.s “Visible”

It is believed that this is the only memorial to Black G.I.s and their units of World War II in Europe. Norman’s goal is to make the Wereth 11 and all Black G.I.s “visible” to all Americans and to history. They, like so many others, paid the ultimate price for our freedom.

Please visit his site where you can learn more about this dark and virtually unknown chapter from WWII.