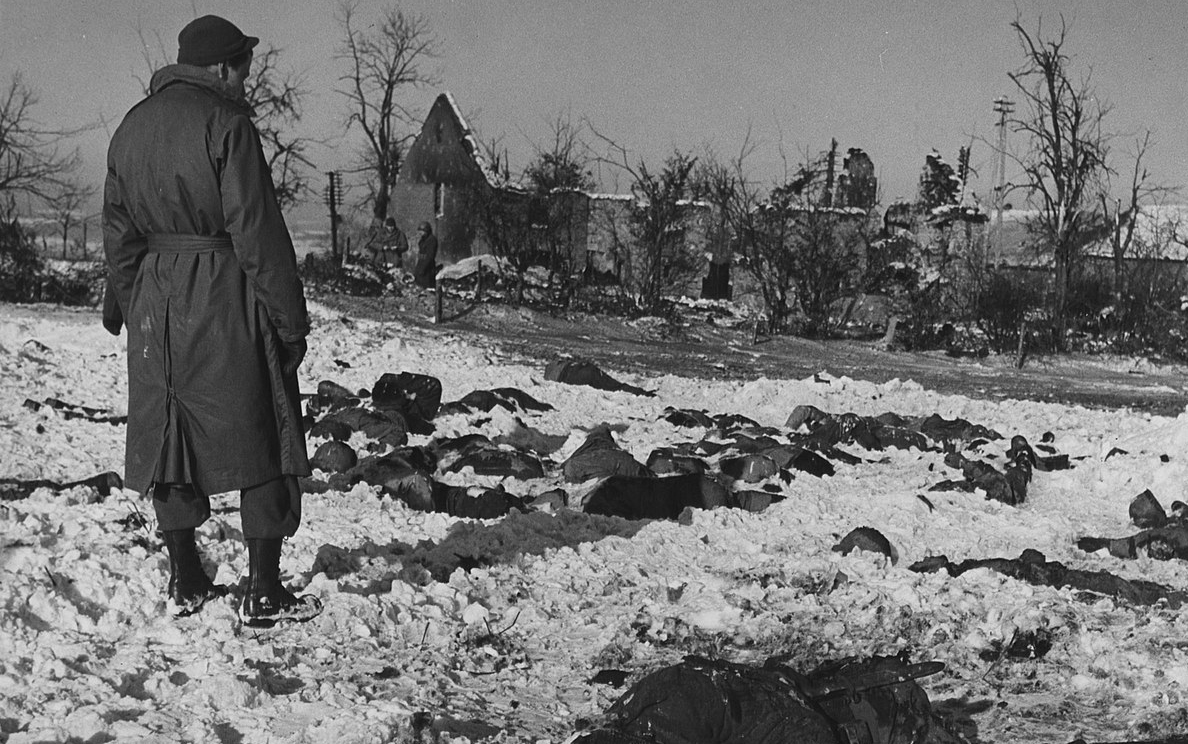 In the last German offensive of World War II, three German Armies conducted a surprise attack along a 50 mile front in the mountainous and remote Ardennes Forest beginning on December 16, 1944, and quickly overtook thin U.S. lines during what became known as the Battle of the Bulge, the deadliest battle in the European campaign.

On December 17, men from Battery B of the 285th Field Artillery Observation Battalion were ordered to move from Schevenhutte, near Aachen, to St Vith in the Ardennes. Their route took them near to the town of Malmedy. On their journey, on the N-23 St Vith road that passed to the east of Malmedy, Battery B met up with Lt. Colonel David Pergrin of the 291st Engineer Combat Battalion.

Pergrin had heard that the Germans were along the route which the men from Battery B were taking. He advised them to take a different route to St Vith. However, the officers in charge of the battery decided that they had their orders and, ignoring Pergrin’s advice, continued along their designated route.

About half-a-mile from the ‘Baugnez Crossroads,’ the convoy was attacked by tanks of the 1st SS Panzer Division of the Leibstandarte-SS, commanded by 29-year-old SS Lt. Col. Jochen Peiper. His troops had earned the nickname “Blowtorch Battalion” after burning their way across Russia, and now operating near Malmedy, reports indicated his unit had been responsible for slaughtering civilians in two separate French villages.

Upon sighting the trucks, two Panzer tanks under the command of SS Lieutenant Werner Sternebeck opened fire and destroyed the lead vehicles. This brought the convoy to a halt while the deadly accurate tank fire continued. Clearly outgunned by the Germans, the men from B Battery surrendered.

The 113 American prisoners-of-war who had survived the attack were herded into a nearby field near the Cafe Bodarwe.

Peiper arrived where the American POWs were being held and ordered Sternebeck to continue moving. Peiper also left the area around Five Points and moved out with the bulk of his forces.

81 Americans Were Killed in the Single Worst Atrocity

According to one report shortly after Peiper left, a SS tank commander then ordered a SS private to shoot into the prisoners, setting off a wild killing spree as the SS opened fire with machine guns and pistols on the unarmed, terrified POWs.

Survivors were killed by a pistol shot to the head, in some cases by English speaking SS who walked among the victims asking if anyone was injured or needed help. Those who responded were shot or clubbed to death as later autopsies showed. A total of 81 Americans were killed in the single worst atrocity against U.S. troops during World War II in Europe. Incredibly, some prisoners did get away after feigning death or by hiding in the trees surrounding the open killing fields. In all, 21 Americans escaped the slaughter and reported the massacre.

News quickly spread among U.S. troops that “Germans are shooting POWs.” As a result, the troops became determined to hold the lines against the German advance until reinforcements could arrive. Gen. Eisenhower was informed of the massacre. War correspondents in the area also spread the news.

By January of 1945, the combined efforts of the Allied armies drove the Germans back to their original starting positions in the Battle of the Bulge. U.S. troops then reached the sight of the massacre, now buried under two feet of winter snow.

The freezing weather had done a lot to preserve the snow-covered bodies, and that made the autopsies easier, especially as some had been covered in snow.

Mine detectors were used to locate the 81 bodies, which had rested undisturbed since the day of the shootings and by now had frozen into grotesque positions. Forty-one of the bodies were found to have been shot in the head. As each body was uncovered, it was numbered.

While the U.S. medical teams performed this grim task, columns of German POWs being led by Americans passed by, with the bodies in plain view, however, no act of vengeance was taken.

Why the Malmedy Massacre Took Place?

Several theories exists as to why the massacre took place. First, the men were deliberately murdered in cold blood. Another theory is that some Americans tried to escape and were fired on by a few Germans. Other Germans heard the firing and either trigger-happy or simply battle-hardened also opened fire on the Americans in the open field.

The two-month trial began May 16, 1946, in a courthouse at Dachau. But controversy soon arose. The defense team raised allegations of mistreatment, including physical abuse by the U.S. Army, and cited the use of mock trials in obtaining SS.

The two-month trial began May 16, 1946, in a courthouse at Dachau. But controversy soon arose. The defense team raised allegations of mistreatment, including physical abuse by the U.S. Army, and cited the use of mock trials in obtaining SS confessions as improper. The defense also complained that the court’s legal expert, a Jew, constantly ruled in favor of the prosecution.

The trial included testimony by a survivor of the Malmedy Massacre who was able to point out the SS man that actually fired the first shot.

On July 11, 1946, the Judges returned a verdict after two and a half hours of deliberation. All of the SS were found guilty as charged. Forty-three, including Peiper, were sentenced to death, and 22, including Dietrich, were sentenced to life imprisonment. The others got long prison terms. But that was not the end of the story.

Controversy continued, however, as various U.S. Army Boards conducted critical reviews of the trial process and methods used during pretrial interrogations. As a result, most of the death sentences were commuted, and over half of the life sentences were reduced. Political complications arose after the Soviets blockaded Berlin in May of 1948. The strategic importance of post-war Germany in the emerging Cold War became apparent to the U.S. amid public outcry in Germany against war crime trials being conducted by the U.S. Army.

In 1949, following a series of public charges and counter-charges by trial participants and further investigations over whether justice had been served in the conduct of the trial, six of the remaining death sentences were commuted. A U.S. Senate Armed Services Subcommittee then began an investigation, led by Sen. Joseph McCarthy, concerning the U.S. Army’s overall handling of the case. The Senate investigation heightened the controversy surrounding the trial, due in part to the aggressive behavior of Sen. McCarthy.

By the early 1950s, following years of accusations, denials, investigations, controversy, and political turmoil, the final remaining death sentences were commuted, and release of all of the convicted SS men began.

Though we may never completely know the truth surrounding the Malmedy massacre – who ordered it, and whether it was at least partly an attempt to stop escaping prisoners – there is no doubt that, in the end, the deaths there stiffened the U.S. resolve to destroy the Nazis, and the hated SS, wherever they found them.

In December of 1956, the last prisoner, Peiper, was released from Landsberg. He eventually settled in eastern France. On July 14, 1976, Bastille Day in France, Peiper, was killed when a fire of mysterious origin destroyed his home. Firefighters responding to the blaze found their water hoses had been cut.

If you enjoyed learning about the Malmedy Massacre, we invite you to read about other battlefield chronicles on our blog. You will also find military book reviews, veterans’ service reflections, famous military units and more on the TogetherWeServed.com blog.  If you are a veteran, find your military buddies, view historic boot camp photos, build a printable military service plaque, and more on TogetherWeServed.com today.