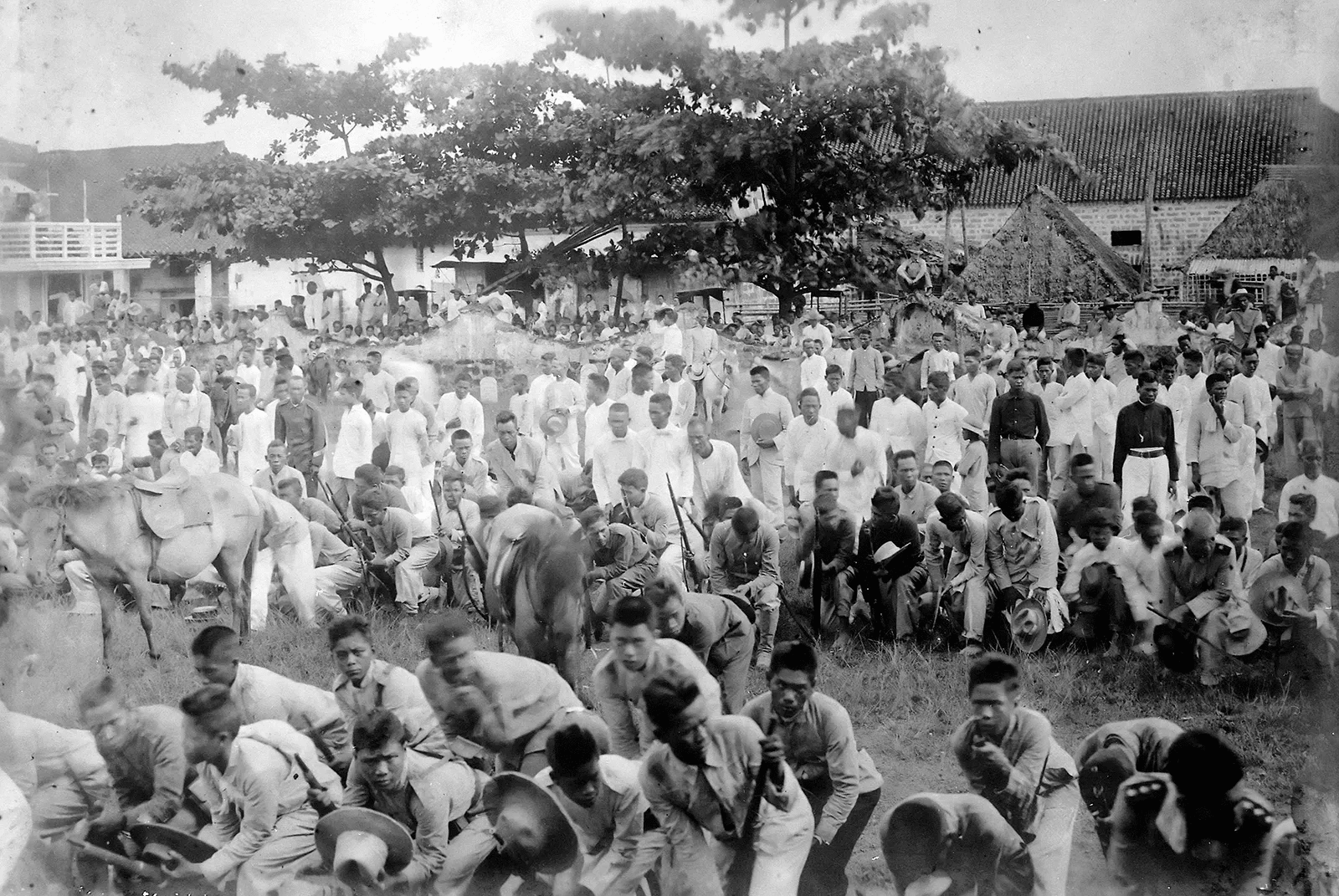 After its defeat in the Spanish-American War of 1898, the Treaty of Paris (1898) transferred Philippine sovereignty from Spain to the United States, ending centuries of Spanish control over the politics and economy of its longstanding former colony. Filipino leaders, however, did not recognize America’s authority and had no intention of ceding their homeland to a new colonial power.

The decision by U.S. policymakers to annex the Philippines was not without domestic controversy, either. Americans who advocated annexation evinced a variety of motivations: the desire for commercial opportunities in Asia, a concern that Filipinos were incapable of self-rule, and fear that if the United States did not take control of the islands, another power (such as Germany or Japan) might do so. Meanwhile, American opposition to U.S. colonial rule of the Philippines came in many forms, ranging from those who thought it morally wrong for the United States to be engaged in colonialism, to those who feared that annexation might eventually permit the non-white Filipinos to have a role in American national government. Others were wholly unconcerned about the moral or racial implications of imperialism sought only to oppose the policies of President William McKinley’s administration.

Annexation came through a circuitous route. Following the sinking of the battleship USS Maine in Havana’s harbor on Feb. 15, 1898, then-Assistant Secretary of the U.S. Navy (and future president) Theodore Roosevelt, while temporarily in charge when Secretary John Long had left early for the day on Feb. 25, responded to what he felt was potential Spanish treachery by placing the entire U.S. Navy on alert worldwide and issuing orders to Commodore George Dewey to gather his Asiatic Squadron in Hong Kong and prepare for war with Spain. When Secretary Long returned to the office the next day, in spite of being surprised and upset at the issuance of such drastic orders without his approval, he did not rescind them. A month later, on Friday, March 25, President McKinley received the Navy’s final report blaming the sinking of the Maine on Spanish mines and ordered the U.S. Navy to blockade all Cuban ports. Finally, after another month of contentious debate, on April 25, Congress declared war against Spain.

During the 2 months on alert following the sinking of the Maine,Dewey’s Asiatic Squadron went through intensive preparations, including re-supply, reinforcement, and very strenuous and continuous drilling and training. On April 26, following the declaration of war, Dewey sailed with four cruisers (including his flagship), two gunboats, a revenue cutter, and two cargo ships loaded with coal for the flotilla, and headed for Manila to engage a Spanish naval force of approximately 20 craft, consisting of two cruisers, gunboats, and smaller torpedo craft. Dewey risked his flotilla 8,000 miles from home, with no supporting naval ports due to neutrality laws, to steam through potentially mined channels lined with ancient forts bristling with big guns. At sunrise on May 1, after successfully and uneventfully sneaking into Manila Harbor overnight, and with deck gun crews yelling, “Remember the Maine!”, Dewey caught the unprepared and ill-trained Spanish fleet flat-footed at anchorage and engaged them in a devastating skirmish with minimal American casualties and no loss of American naval craft. The Spanish fleet surrendered within hours, but Dewey was unable to occupy Manila for over 3 months until ground troops arrived.

The Philippine-American War Was Inevitable

While the American public and politicians debated the annexation question, Filipino nationalist revolutionaries led by Emilio Aguinaldo seized control of most of the Philippines’ main island of Luzon and proclaimed the establishment of the independent Philippine Republic.

On August 13, Manila fell after a bloodless “battle”. Spanish Gov. Fermin Jaudenes had secretly arranged a surrender after a mock show of resistance to salvage his honor. With American troops in possession of the city and Filipino insurgents controlling the rest of the country, conflict was inevitable.

On February 4, 1899, just two days before the U.S. Senate ratified the treaty, sporadic fighting broke out between American forces and Aguinaldo’s nationalist fighters. When it became clear that U.S. forces were intent on imposing American colonial control over the islands, the clashes escalated into an all-out Philippine-American War. Americans tended to refer to the ensuing conflict as an “insurrection” rather than to acknowledge the Filipinos’ contention that they were fighting to ward off a foreign invader.

The United States entered the conflict with undeniable military advantages that included a trained fighting force, a steady supply of military equipment, and control of the archipelago’s waterways. Meanwhile, the Filipino forces were hampered by their inability to gain any kind of outside support for their cause and complications produced by the Philippines’ geographic complexity, resulting in chronic shortages of weapons and ammunition. Under these conditions, Aguinaldo’s attempt to fight a conventional war against the better-trained and equipped American troops in the early month of the conflict in February 1899 proved to be a fatal mistake; the Filipino army suffered severe losses in men and material before switching to the guerrilla-style tactics that might have been more effective if employed from the beginning of the conflict.

The Philippine-American War Was Brutal on Both Sides

Throughout the spring of 1899, American troops pushed north into the central Luzon Plain, and by the end of that year, Filipino Gen. Emilio Aguinaldo had retreated into the inaccessible northern mountains.

Fighting flared with increased bitterness on the island of Samar in 1901. Gen. Jacob H. Smith, enraged by a guerrilla massacre of U.S. troops, launched a retaliatory campaign of indiscriminate and ferocious retribution on the island, resulting in the deaths of between 2,500 civilians (according to western researchers) and 50,000 civilians (according to Filipino historians). His orders included, “kill everyone over the age of ten,” and to “make the island a howling wilderness.” For his notorious actions, he was court-martialed and forced to retire.

Guerrilla hit and run tactics began in November of 1899 and lasted through the capture of Aguinaldo in 1901 and into the spring of 1902, by which time most organized Filipino resistance had dissipated. President Theodore Roosevelt proclaimed a general amnesty and declared the conflict over on July 4, 1902, although minor uprisings and insurrections against American rule periodically occurred in the years that followed.

The Philippine-American war was brutal on both sides. U.S. forces at times burned villages, implemented civilian reconcentration policies, and employed torture on suspected guerrillas, while Filipino fighters also tortured captured soldiers and terrorized civilians who cooperated with American forces. Many civilians died during the conflict as a result of the fighting, cholera and malaria epidemics, and food shortages caused by several agricultural catastrophes.

Even as the fighting went on, the colonial government that the United States established in the Philippines in 1900 under future President William Howard Taft launched a pacification campaign that became known as the “policy of attraction.” Designed to win over key elites and other Filipinos who did not embrace Aguinaldo’s plans for the Philippines, this policy permitted a significant degree of self-government, introduced social reforms, and implemented plans for economic development. Over time, this program gained important Filipino adherents and undermined the revolutionaries’ popular appeal, which significantly aided the United States’ military effort to win the Philippine-American war.

After 1902 the American civil government regarded the insurrection as over, and the remaining guerrillas as mere bandits, though the fighting continued for years later. About 1,000 guerrillas under Simeon Ola were not defeated until late 1903, and in Batangas province, south of Manila, troops commanded by Macario Sakay resisted capture until as late as 1906.

The Last US Resistance in the War

The last organized resistance to U.S. power took place on Samar from 1904 to 1906. There the rebels’ tactic of burning pacified villages contributed to their own defeat. In 1907, the Philippines convened its first elected assembly, while an unconnected insurgency campaign by Moro bands on Mindanao continued sporadically until 1913. The United States had gained undisputed control of the Philippines, and the archipelago became an autonomous commonwealth in 1935.

Except for a 3-year period during WWII when Japanese forces occupied and brutally subjugated the Philippines, the U.S. retained possession of the islands until 1946, when it finally granted independence. But it wasn’t until 1992, after the rejection of the U.S. Bases Extension Treaty by the Filipino government, that the U.S. relinquished the last of its naval and air bases in the sprawling archipelago.

The Philippine-American War’s cost was significant in the loss of human life. An estimated 20,000 Filipino troops were killed, and more than 200,000 civilians perished as a result of combat, hunger, or disease. Of the 4,300 Americans lost, some 1,500 were killed in action, while nearly twice that number succumbed to the disease.

If you enjoyed learning about the Philippine-American war, we invite you to read about other battlefield chronicles on our blog. You will also find military book reviews, veterans’ service reflections, famous military units and more on the TogetherWeServed.com blog.  If you are a veteran, find your military buddies, view historic boot camp photos, build a printable military service plaque, and more on TogetherWeServed.com today.