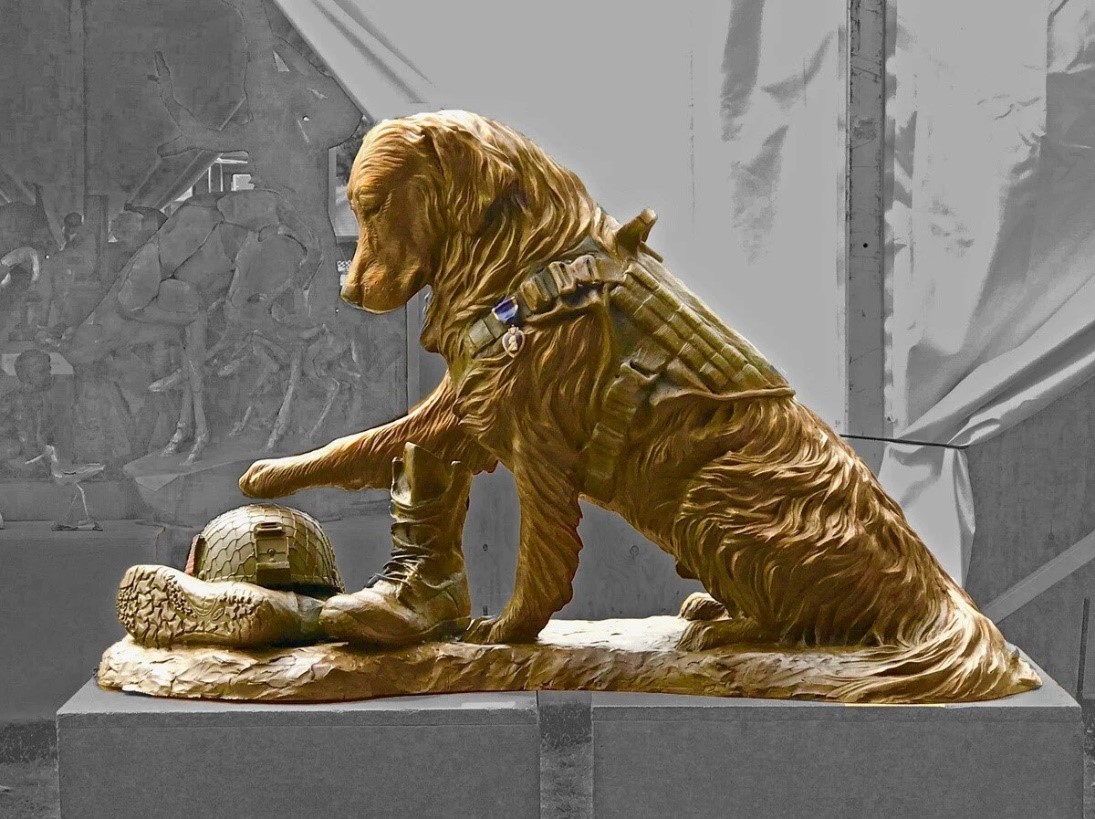 The sculpture shows a military working dog at the grave of his handler. The dog is wearing a Purple Heart medal and seems to be grieving his human friend’s loss.

A new sculpture honors the efforts and sacrifices of military working dogs. Susan Norris is the sculptor of “My Hero, My Friend,” which has been moving people to tears when they see it.

Norris stated in a press release that she has always enjoyed animals but felt that the bond between a military working dog and its handler was “on a whole other level.”

The sculpture will be installed at the Veterans Memorial Park in Trophy Club, Texas – part of the Dallas-Fort Worth metropolitan area.

Throughout the years, working dogs have been known as War Dogs and K-9 Corps, among many other names. Dogs have served the military as guards, messengers, mascots, and scouts. The working dog program has been increased as US involvement in Afghanistan and Iraq increased. Many are trained to detect mines and improvised explosive detection.

According to a US Army book on veterinary services in the military, dogs have become members of forward-deployed teams and served with airborne units. They have been transported by helicopters when necessary.

Dogs are useful to the military because their senses can pick up on things that humans cannot; they can go into areas that humans can’t get into. They are often able to subdue attackers with a nonlethal force more quickly than their human counterparts can. Nine thousand three hundred dogs were used in World War II as sentry dogs. These were used to guard military bases, airfields, depots, and industrial plants. The largest group of sentry dogs were issued to the Coast Guard to patrol the beaches and guard against enemy submarines. Scout dogs were trained to detect enemy soldiers’ presence and silently alert the rest of the team. A dog can detect a human 1,000 yards away, which gives the soldiers a greater level of safety from ambushes and would raise morale for the team. Messenger dogs would carry communications from one handler to another. They were trained to utilize cover and to move silently while carrying messages between the two soldiers. Mine dogs are trained to detect explosives. They were used in North Africa during World War II but had difficulty detecting mines during combat conditions. During WWII, five breeds were found to make good working dogs: German Shepherds, Belgian Sheep Dogs, Doberman Pinschers, Farm Collies (short coat), and Giant Schnauzers. Great Danes were found to be too large, and hunting breeds were rejected because they were too obsessed with animal scents. Alaskan Malamutes and Huskies were trained for use in the Arctic as sled dogs. Casualty dogs were trained as search and rescue dogs to find injured soldiers. The time saved by the dogs, quickly locating the wounded soldiers, could often be the difference between life and death. Tunnel dogs were used extensively in the Vietnam war to find enemy soldiers hiding in the Viet Cong tunnels.

Today, the military mainly focuses on German and Dutch Shepherds and Belgian Malinois. These breeds are loyal, smart, very aggressive, and athletic. German Shepherds are preferred since they consistently show all the traits prized in the field. When it comes to odor detection, though, specialized breeds are often preferred, especially those of the Retriever variety. Explosive detection dogs are the ones that are being used in the Middle East. They can detect the chemicals in the explosives, making it difficult for the ISIS combatants to hide explosives. However, numbers of K-9 teams are down since WWII: there are estimated to be around 2,300 working dogs in the military. Year-round, more than 1,000 working dog teams are trained at the Department of Defense Military Working Dogs Training School (DoD MWD) at Lackland.

Other Heroic Dogs that Served the United States

As well as the many K-9 units in the military, many dogs have intervened to save American lives in times of crisis. There were over 300 rescue dogs on 9/11. The whole country sounded sirens and rung bells, and human-canine search and rescue teams responded from across the States. The four-legged heroes of September 11th gathered to pull the living and human remains from the rubble, many suffering injuries and enduring incredible peril to do the job they were trained for.