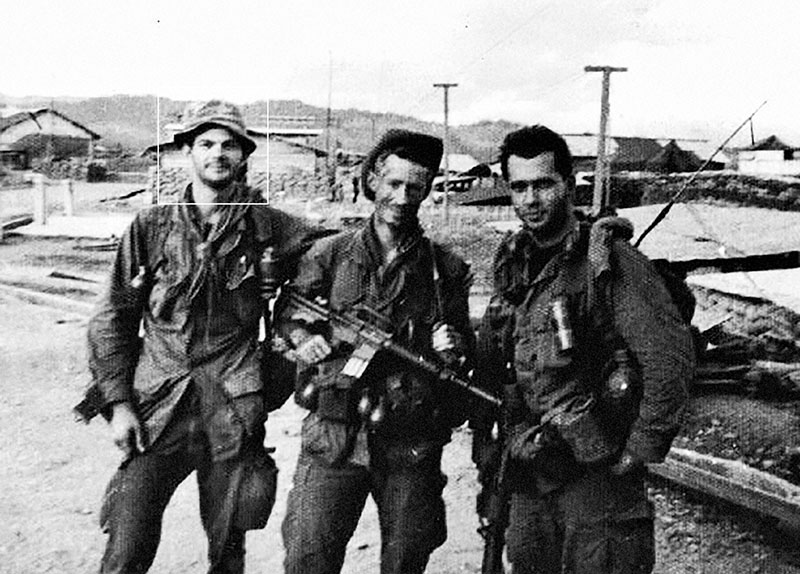 For conspicuous gallantry and intrepidity in action at the risk of his life above and beyond the call of duty. SFC Zabitosky, US Army, distinguished himself while serving as an assistant team leader of a nine-man Special Forces long-range reconnaissance patrol. SFC Zabitosky’s patrol was operating deep within the enemy-controlled territory in Laos when they were attacked by a numerically superior North Vietnamese Army unit.

SFC Zabitosky rallied his team members, deployed them into defensive positions, and, exposing himself to concentrated enemy automatic weapons fire, directed their return fire. Realizing the gravity of the situation, SFC Zabitosky ordered his patrol to move to a landing zone for helicopter extraction while he covered their withdrawal with rifle fire and grenades. Rejoining the patrol under increasing enemy pressure, he positioned each man in a tight perimeter defense and continually moved from man to man, encouraging them and controlling their defensive fire. Mainly due to his example, the outnumbered patrol maintained its precarious position until the arrival of tactical air support and a helicopter extraction team. As the rescue helicopters arrived, the determined North Vietnamese pressed their attack.

SFC Zabitosky repeatedly exposed himself to their fire to adjust suppressive helicopter-gunship fire around the landing zone. After boarding one of the rescue helicopters, he positioned himself in the door delivering fire on the enemy as the ship took off. The helicopter was engulfed in a hail of bullets, and SFC Zabitosky was thrown from the craft as it spun out of control and crashed. Recovering consciousness, he ignored his extremely painful injuries and moved to the flaming wreckage. Heedless of the danger of exploding ordnance and fuel, he pulled the severely wounded pilot from the searing blaze and made repeated attempts to rescue his patrol members but was driven back by the intense heat. Despite his serious burns and crushed ribs, he carried and dragged the unconscious pilot through a curtain of enemy fire to within 10 feet of a hovering rescue helicopter before collapsing.

SFC Zabitosky’s extraordinary heroism and devotion to duty were in keeping with the highest traditions of the military service and reflect great credit upon himself, his unit, and the US Army.

View more Profiles in Courage on our blog.