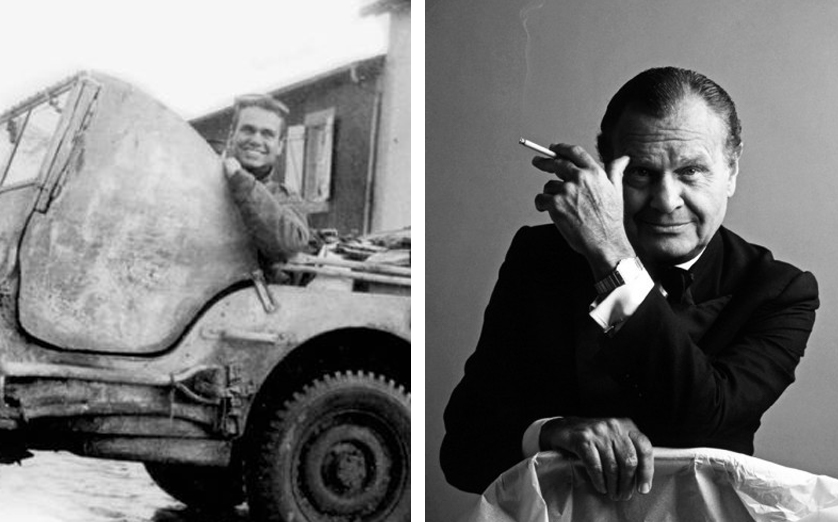 William (or Bill) Ralph Blass who served in the US Army between 1943 and 1945 is better known for his contributions to the fashion industry. However, his efforts during World War II are as remarkable as they are unusual.

William Ralph Blass was born on June 22 1922, in Fort Wayne, Indiana. His father was a traveling salesman, his mother a dressmaker. Sadly, Blass’ father committed suicide when Bill was 5. Bill took after his mother, sketching Hollywood-inspired fashions in the margins of his schoolbooks. At the young age of fifteen, he sewed and sold evening gowns to a New York manufacturer for $25 a pop. At seventeen, he had enough money to move to Manhattan and study fashion at Parson’s School of Design. One year later, he was the first man to win Mademoiselle’s Design for Living award. In 1942, he enlisted in the US Army.

Bill Blass’s talents were recognized by the Army and he was assigned to the 603rd Camouflage Division, a top-secret division that was part of the 23rd Headquarters Special Troops, involved in counterintelligence operations on the Western Front. Its mission was to baffle German intelligence operatives by projecting armored strength in fake locations using multiple methods such as dummy tanks. The task of deceiving the German Army was a complex one: the fake intelligence had to be camouflaged in such a way that it would be tricky but not impossible to spot.

Too easy to see, and the Germans would correctly identify it as a feint. Too difficult, and the dummies would not be seen at all. Blass was a popular member of the division, known for his broad smiles in spite of the injuries and deaths the unit sustained. For his part, Blass was simply excited to be, as he saw it, truly independent and self-sufficient for the first time in his short life. His esprit de corps was rewarded with a promotion to Sergeant.

Bill Blass and the Ghost Army

Though Blass was not the only artist in the unit (indeed, he was often sketched by other soldiers) he was a significant contributor to the efforts to paint intricate but ultimately ineffective camouflage for fake Allied armour. The Ghost Army of World War II, as the 23rd became known, were a traveling road show of sorts that would incorporate audio, visual, and social methods of deception. ‘Loudmouth American’ GIs with misleading insignias would wander into French taverns and gossip at volume about phony operations, with the intention that German intelligence assets would overhear and filter the misinformation back to headquarters. The unit was present at several major WW2 operations from Normandy to the Rhine River crossing, even the Battle of the Bulge.

What is Bill Blass Famous For?

After the war, Blass began his New York fashion career. He worked for 25 years in various fashion houses, starting at Anne Klein before working for Anna Miller. During his career, he won several Coty Awards, the first of which was in 1968 for menswear after becoming the first American couture fashion designer to start a menswear line the year prior. In 1970 he established Bill Blass Limited after buying Maurice Rentner Ltd., which he had joined in 1959. Blass designed swimwear, furs, luggage, perfume, even chocolate. Between 1975 and 1992, Blass collaborated with the Ford Motor Company, working on their Continental Mark series of vehicles. His clients, many of whom were personal friends, included Happy Rockefeller, Gloria Vanderbilt, and Jessye Norman.

The Council of Fashion Designers of America (CFDA) awarded Blass their Lifetime Achievement Award in 1987, and was the inaugural recipient of their Humanitarian Leadership Award in 1996 in recognition of his philanthropy towards causes such as the New York Public Library and the AIDS Care Center at the Cornell Medical Center. In 1999 Blass retired to his home in Preston, Connecticut, selling his company. He began writing his memoir, Bare Blass, but was diagnosed with oral cancer in 2000. At the age of 79, in 2002, Blass passed away. He received fond eulogies from prominent socialites in New York and beyond. Bill Blass should be remembered both as an incisive and inventive designer, and as a veteran whose counterintelligence work helped accelerate the conclusion of the war in Europe, saving countless civilian and service member lives on both sides.