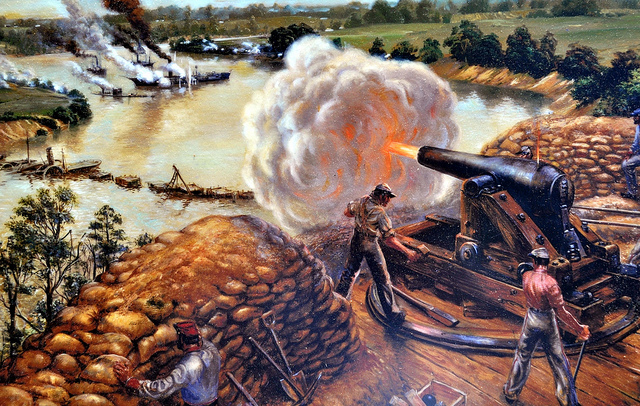 Richmond was the Confederate capital and vulnerable to attack by the Union Army on land, and by the Union Navy through the navigable James River. In March 1862, Confederate Captain Augustus H. Drewry ordered the construction of fortifications and the installation of large guns on his property, which was on a 90-foot bluff above the James River, and just seven miles from Richmond.

Early in May, Norfolk fell to Union forces and the Confederate ship C.S.S. Virginia took refuge to avoid capture. This left the James River at Hampton Roads exposed and open to Union warships. At Drewry’s Bluff, Confederate forces filled the river with underwater obstructions, including debris, sunken steamers, and pilings to prevent Union ships from reaching Richmond. Then they took up defensive positions in the fort and along the banks.

A detachment of Naval vessels took advantage of the open waterway and made a push for Richmond. The USS Monitor and USS Galena, and gunboats Aroostook, Port Royal, and Naugatuck steamed up the James River. As they approached the bend at Drewry’s Bluff, they encountered the obstacles and anchored just below the fort. The Galena opened fire and the Confederates responded. Armor-piercing shots penetrated the Galena causing extensive damage. The Monitor’s armor was much thicker, allowing for the shots to ricochet off, but her rotating guns were not able to raise at an angle high enough to fire on the fort. The gunboats encountered problems too. The Port Royal was hit below the waterline and the Naugatuck’s gun burst. For more than three hours of intense fire, the Galena took the brunt of the attack.

U.S. Marine John F. Mackie was aboard the Galena and watched as one by one, the naval gun crew was either wounded or killed. Mackie commanded a dozen Marines on the gun deck and led his men to take over operation of the guns. For his “gallant conduct and services,” President Abraham Lincoln later personally bestowed the Medal of Honor upon Mackie. He is the first Marine to receive that honor.

The  was as part of the Peninsula Campaign of the American Civil War.

The The Battle of Drewry’s Bluff was as part of the Peninsula Campaign of the American Civil War.