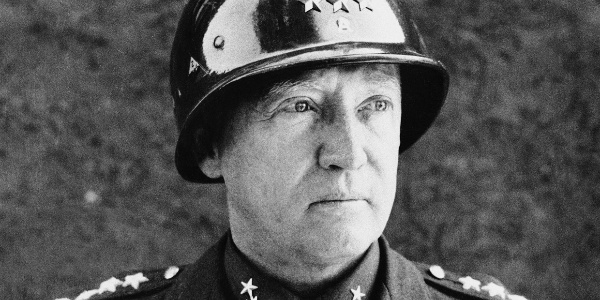 Patton had his first real taste of battle in 1915 when leading cavalry patrols against Poncho Villa at Fort Bliss along the Mexican border. In 1916 he was selected to aide John J. Pershing, commander of the American Expeditionary Forces in Mexico. In Mexico, Patton impressed Pershing by personally shooting Mexican leader Julio Cardenas during the Battle of Columbus. Pershing promoted Patton to captain and invited him to lead Pershing’s Headquarters Troop once they left Mexico.

In 1917, during WWI, Patton was the first officer assigned to the new American Expeditionary Force Tank Corps. Tanks had proven effective in France at the Battle of Cambria. Patton studied this battle and established himself as one of the leading experts in tank warfare. He organized the American tank school in Bourg, France, and trained American tankers to pilot the French Renault tanks. Patton’s first battle was at St. Mihiel, in September 1918. He was later wounded in the battle of Meuse-Argonne and later earned the Distinguished Service Medal for his leadership of the tank brigade and establishing the tank school.

It was during WWII that Patton hit the high point of his military career. In 1943 he used daring assault and defense tactics to lead the 7th U.S. Army to victory at the invasion of Sicily. On D-Day in 1944, when the allies invaded Normandy, President Roosevelt granted Patton command of the 3rd U.S. Army. Under Patton’s leadership, the 3rd Army swept across France, capturing town after town. “Keep on advancing – whether we go over, under, or through the enemy,” Patton told his troops. Nicknamed “Old Blood and Guts” due to his ruthless drive and apparent lust for battle, he wrote home to his wife, “When I’m not attacking, I get bilious.”

In 1945, Patton and his army managed to cross the Rhine and charge straight into the heart of Germany, capturing 10,000 square miles of enemy territory along the course of the 10-day march, and liberating Germany from the Nazi’s in the process.

In December of 1945, General George S. Patton broke his neck in a car crash near Mannheim, Germany. He died at the hospital in Heidelberg 12 days after, on December 21, 1945. In 1947, his memoir, “War as I Knew It”, was published posthumously.

To this day, Patton is considered one of the most successful field commanders in U.S history.

The following are ten additional facts about the outspoken American General nicknamed “Old Blood and Guts.”

As a 26-year-old Army Cavalry Officer, Patton was selected as the sole American competitor in the first-ever Olympic modern pentathlon at the 1912 Summer Games in Stockholm. Of the 42 competitors, he finished in fifth place, although he might have medaled if not for controversy in the pistol-shooting event. While the judges believed Patton missed the target with one of his shots, he argued that he was so fine a marksman that one of his bullets actually traveled through a bullet hole he had already made. Patton was also selected for the 1916 Olympic team, but the Games were canceled due to World War I.

Patton claimed he had seen combat many times before in previous lives, including as a Roman legionnaire and as part of the 14th-century army of John the Blind of Bohemia. Before the 1943 invasion of Sicily, British General Harold Alexander told Patton, “You know, George, you would have made a great marshal for Napoleon if you had lived in the 19th century.” Patton replied, “But I did.” The general believed that after he died he would return to once again lead armies into battle.

Patton was forced to repeat his first year at West Point

Patton struggled academically during his initial year at the U.S. Military Academy and was required to repeat his first year after failing mathematics. The plebe began working with a tutor and redoubled his efforts to receive adequate grades the remainder of his tenure at West Point, eventually graduating 46th in his class of 103 cadets.

In response to a deadly 1916 raid by Poncho Villa in Columbus, New Mexico, President Woodrow Wilson ordered American troops across the Mexican border to capture or kill the Mexican revolutionary. Patton served as aide-de-camp to the mission’s commander, General John J. Pershing, and participated in the first motorized attack in the history of American warfare on May 14, 1916, in which Villa’s second-in-command and two of his guards were killed. Patton garnered headlines by ordering the three corpses strapped like trophy animals to the hoods of his unit’s automobiles before driving back to base.

Patton fired a new ivory-handled Colt .45 in the deadly Mexican shootout, but after the battle, he decided to carry a second ivory-handled handgun for added firepower. The flamboyant pistols contained his hand-carved initials and became his trademarks.

Patton earned a Purple Heart in World War I

While personally leading an attack on German machine gun positions as part of the Meuse-Argonne Offensive on September 26, 1918, Patton was struck by a round that tore into his left thigh. Badly wounded, he continued to command the battle for the next hour from a shell hole and insisted on filing his report at division headquarters before being taken to the evacuation hospital. When the Purple Heart was reinstituted in 1932, Patton was awarded the honor for his combat wounds.

On July 28, 1932, Patton received orders from U.S. Army Chief of Staff Douglas MacArthur to disperse the World War I veterans seeking cash payments for their veterans’ bonus certificates who had occupied Washington, D.C., for two months. Charging down Pennsylvania Avenue and through the streets of the national capital, Patton led 600 cavalry troops on horseback who fired tear gas into the “Bonus Marchers,” trampled civilian observers including Connecticut Senator Hiram Bingham and beat protestors with the flats of their swords.

Gen George S. Patton was used as a decoy in the lead-up to D-Day

General Dwight Eisenhower believed Patton too undisciplined to lead the Allied invasion of Normandy, particularly after the impulsive Patton slapped two shell-shocked Soldiers under his command in an Italian field hospital in August 1943. Nazi military leaders, however, considered him the Allies’ best commander and expected he would lead a cross-channel invasion. As part of the elaborate disinformation campaign leading up to D-Day, Patton was placed in charge of a phantom army, complete with plywood aircraft and inflatable rubber tanks, in southeast England to make it appear he would strike at the channel’s narrowest point at Pas de Calais, France. Even weeks after D-Day, the Germans continued to amass troops at Pas de Calais expecting that Patton would still come ashore there.

His grandfather was Mayor of Los Angeles

Patton’s maternal grandfather, Benjamin Davis Wilson, was a powerful southern California landowner who became the second elected mayor of Los Angeles in 1851. He also served as a county clerk, a county supervisor, and a State Senator. Mount Wilson in the San Gabriel Mountains is named in his honor.

Patton designed his own sword

Patton was one of the top swordsmen at West Point and among the foremost fencers in the United States. He redesigned the Army’s saber combat doctrine for the cavalry by favoring thrusting attacks over slashing maneuvers and designed the Model 1913 Cavalry Saber, a new straight-blade weapon designed for thrusting that became known as the “Patton Sword.”