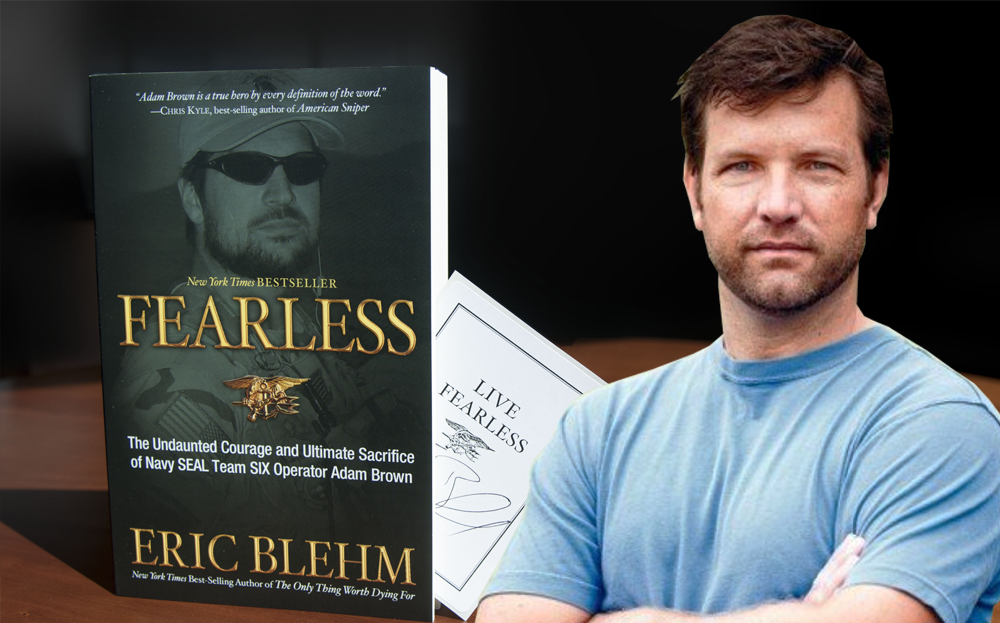 When Navy SEAL Adam Brown woke up on March 17, 2010, he didn’t know he would die that night in the Hindu Kush Mountains of Afghanistan – but he was ready. In a letter to his children, not meant to be seen unless the worst happened, he wrote, “I’m not afraid of anything that might happen to me on this earth, because I know no matter what, nothing can take my spirit from me.”

Fearless is the story of a man of extremes, whose courage and determination were fueled by faith, family, and the love of a woman. It’s about a man who waged a war against his own worst impulses, including drug addiction and persevered to reach the top tier of the U.S. military. In a deeply personal and absorbing chronicle, Fearless reveals a glimpse inside the SEAL Team SIX brotherhood and presents an indelible portrait of a highly trained warrior whose final act of bravery led to the ultimate sacrifice.

Adam Brown was a devoted man who was an unlikely hero but a true warrior, described by all who knew him as, fearless.

‘Fearless’ is the story of a Navy SEAL who would rather die than let down his fellow teammates. This story explores the physical, mental and spiritual capacities of these incredible citizens of the USA.

Ignoring severe injuries, SEAL Adam Brown was able to put others first, whether those be his fellow SEALs, the Afghan children around the military base or some other total stranger. The multiple accounts of his bravery and courage are sure to inspire anyone who faces any sort of a trial or tribulation.

Although Adam Brown died fighting for his beliefs, his spirit and essence live on through his legacy of courage and generosity. You know going into the book that he dies but reading about how he lived provides the real context of why this story is important.
~J. Lietz

Here is a man who battled his own demons for years yet managed to train himself to become a Navy SEAL which only around .01 percent of males could do. And yet he did it despite overcoming all manner of serious injuries: broken arms, legs, fingers, even losing an eye (an eye!) in a training accident and yet he managed to become a sniper despite these severe handicaps. And as anyone who has read either Chris Kyle or Brandon Webb, there is no more challenging calling in our armed forces that becoming a Navy SEAL sniper requiring not only unreal physical and mental stamina but also tremendous intellectual capacity as well. He was also a devoted father to his children and a great husband to his wife, who is also one of the heroines of our time

He died doing what he most loved: Saving his brother soldiers-and America is the luckier for having troopers such as Aaron Brown in their midst. Get this book and read it!
~The Rat Man

Adam’s story of triumph and patriotism is unmatched. I am so thankful that we have men and women that answer the call to protect our country. And few are as special as Adam Brown.

Considering Adam’s family, especially his wife and children, I want to say that they serve as well. I have spent a lot of time away from my wife and kids as a result of my service. Although, I’m never in harm’s way like a SEAL. But it’s easy to forget those who are left at home. This book helped show the importance of the family that a service member leaves at home. That was, surprisingly, one of my favorite things about this book – that it highlights the struggles of a mother and her children while daddy is away fighting for their freedom. It’s beautiful and tragic at the same time.
~Bradley Adamson

Excellent book! The story of Fearless is a study of the incredible drive, strength, fortitude and fearlessness of Adam Brown. In writing this review I will try not to give away any details of the book. Fearless traces the life of Adam Brown from childhood to the brotherhood of the US Navy Seals. And not just the Navy Seals, Adam strived to be the best of the best, a Seal Team 6 operator. Seal Team 6 operators are the elite of the elite. You take the top 1% of the U.S. Navy and you have the Navy Seals. As you read the book, for Adam Brown to achieve this status with the difficulties he faced was just incredulous. Adam never said the word no. Every time there was a daring feat to try or a dangerous mission to take on, Adam was the first one to volunteer. Author Eric Blehm does a fantastic job in telling the life story of Adam Brown. He vividly describes the life, love, respect, and feelings Adam was afforded and gave. I cannot say enough about this book. Great story, great narrator. THIS BOOK IS A MUST READ!!!
~J. Madden

This is quite possibly my favorite book of all time. Adam’s story is absolutely amazing and truly inspiring! It shows the power of perseverance and the human spirit. It starts off on an emotional note and ends the same way. But no matter how sad the story, it’s still incredibly moving and powerful. If you enjoy non-fiction about military persons or any stories that highlight the power of the human mind, I don’t think you’d go wrong with this book. I’ve recommended it to every one of my friends and family.
~Colt P. Templin

Eric Blehm is the award-winning author of the New York Times bestsellers ‘Fearless’ and ‘Only Thing Worth Dying For.’ His first book, ‘The Last Season.’ was the winner of the National Outdoor Book Award and was named by Outside magazine as one of the “greatest adventure biographies ever written.”

He has dedicated his life to telling the stories of those who serve.

In 1999, Blehm became the first journalist to accompany and keep pace with an elite Army Ranger unit on a training mission. His access into the Special Operations community and reportage set an important milestone for American war journalism two years before reporters began to gain widespread embedded status with the U.S. military in the War Against Terror. Blehm’s immersion with the Rangers is what led him to the previously untold story of an elite team of eleven Green Berets who operated in the hinterland of Taliban-held Afghanistan just weeks after 9/11 ‘The Only Thing Worth Dying For’ as well as to ‘Fearless’ the heartrending and inspiring story of Naval Special Warfare Operator (SEAL) Adam Brown, who overcame tremendous odds in his rise to the top tier of the U.S. military: SEAL Team Six. ‘Fearless’ is currently being adapted for film by a major Hollywood studio.

He lives in Southern California with his wife and children.