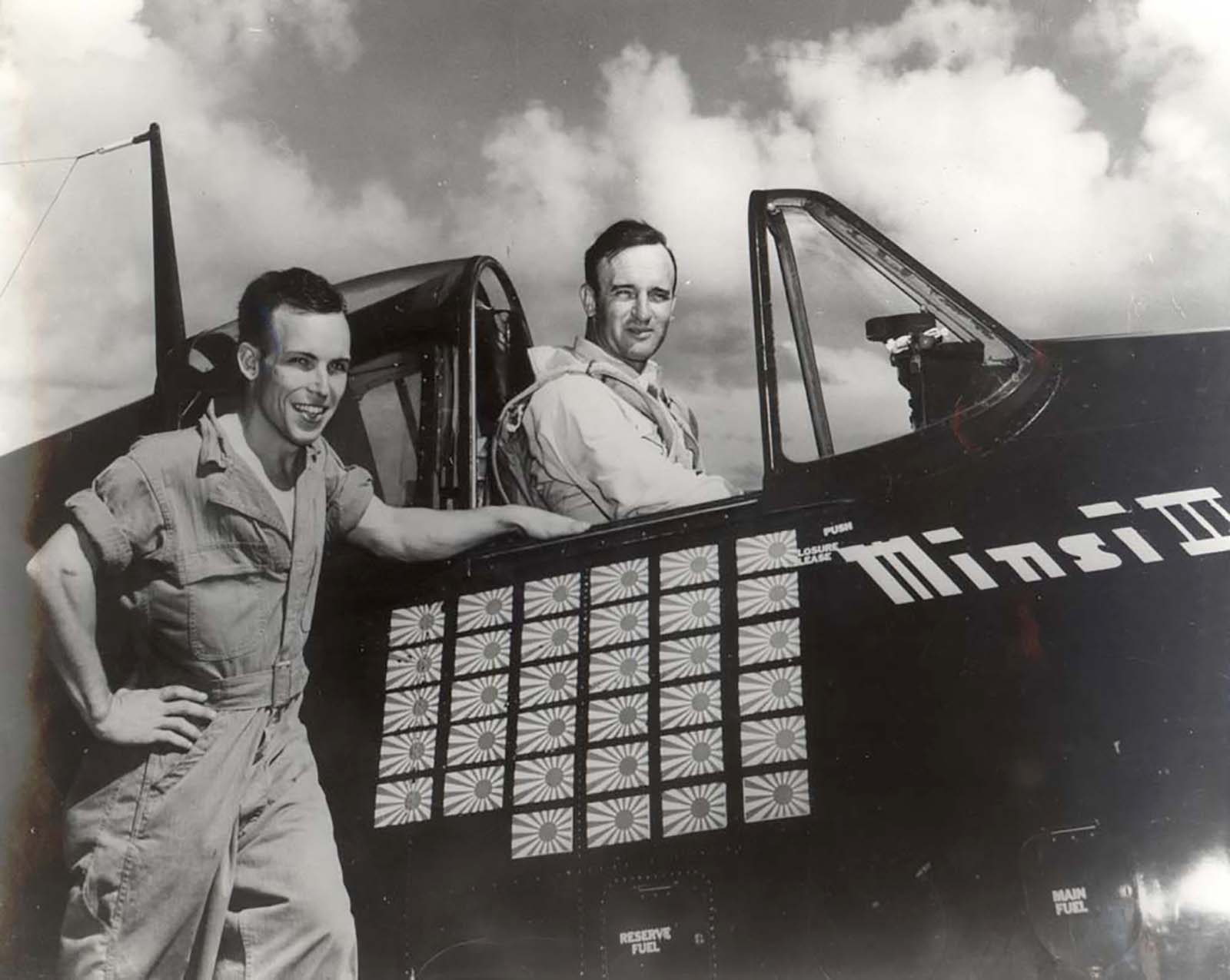 All available fighter pilots! Man your planes!” boomed the squawk box in Essex’ ready room. The ship’s radar had detected three large groups of Japanese planes coming in. David McCampbell, the CAG, and the Navy’s most famous aviator considered this announcement. Earlier that morning, Admiral Sherman himself had forbidden McCampbell from joining a dawn sortie. Given his responsibilities as Commander of Essex’ Air Group and his public prominence as a top ace, McCampbell was too valuable. He decided that he was indeed “available” and headed for his airplane, Minsi III. His plane crew hurried to fuel Minsi III, which had not been scheduled to fly that day. With the Hellcat only partially fueled, the Flight Officer ordered it off the flight deck – either into the air or below to the hangar deck. McCampbell went up, leading Essex’s last seven fighters toward the Jap strike force.

He and Ens. Roy Rushing got out in front of the other Hellcats, putting on all speed to intercept the Japs, then only 22 miles away. He directed the other F6F’s to get the bombers, while he and Rushing tackled the fighters. Surprisingly, the enemy fighters turned, allowing McCampbell and Rushing to gain altitude and a position behind them.

Seeing over 40 Japanese fighters, McCampbell radioed back to the carrier for help. “Sorry, none available.” The enemy planes spread out in a typical formation of three V’s. McCampbell picked out a Zero on the extreme right and flamed it. Rushing also got one on this first pass. Incredibly, there was no reaction from the Japs as they climbed back up to regain altitude. The two Hellcat pilots dived back down on their quarry for another pass; McCampbell blew up a second Zero. Now the gaggle of Zeros, Tonys, Hamps, and Oscars reacted – by going into a Lufbery! McCampbell made a couple of head-on passes against the formation, but without results.

David Mccampbell Was the Cag, and the Navy’s Most Famous Aviator

A strange interlude ensued as McCampbell and Rushing climbed back up and circled, while the Japanese fighters continued to circle below. McCampbell radioed again for help; one of the Hellcats that had been going after the bombers headed his way. The Lufbery broke up and the planes headed toward Luzon in a wide Vee. The two American fliers closed in again on the formation. McCampbell opened at 900 feet and exploded his third plane of the morning. Rushing shot down his second one.

Apparently low on fuel, the Japanese planes doggedly flew on, maintaining formation. On his next firing pass, gunfire coming from behind forced McCampbell to break off his attack and pull up. It was another Hellcat shooting too close to him. A few choice words straightened things out. Still, the enemy planes didn’t turn and mix it up.

McCampbell realized he could relax and take his time. This was practically gunnery exercise. He could focus on identifying his targets carefully. The next one was an Oscar. Again, his six fifties roared and blasted the Oscar’s wing root. It flamed for number four. Rushing had scored his third by this time. This continued for several more passes until McCampbell had downed 7 and Rushing 6. Rushing radioed that he was out of ammo, but he would stay on McCampbell’s wing while the CAG used up his remaining bullets.

Two more passes and two more kills. As the Jap planes approached the security of their bases on Luzon, the two Americans’ low fuel finally ended the slaughter. The Hellcats broke off and headed for Essex. In one morning, sortie, McCampbell had shot down nine enemy planes and Rushing six, an unparalleled achievement in American fighter aviation.

Born on January 16, 1910, this Bessemer, Alabama native’s naval career began with dismissal. Graduating from the U.S. Naval Academy in depression- era 1933, he was rewarded with an honorable discharge from a Navy without funds. But in June 1934 McCampbell was called back and commissioned.

In 1936 his first assignment involving aircraft was gunnery observer aboard USS Portland. In 1937, McCampbell’s flying career finally got off the ground at Pensacola Naval Air Station where he reported for flight training. A year later, he was designated a Naval Aviator and received his first flying assignment with Fighting Squadron 4 aboard the USS Ranger, CV-4 where he served two years.

Wasp was home from 1940 until she went to the bottom in 1942. During that time were two hot runs to the Mediterranean delivering Spitfires to Malta and support to the Guadalcanal campaign.

After Wasp was sunk on Sept. 15, 1942, by a Japanese submarine, David McCampbell returned to the States to fit out a new squadron, Air Group 15, aka “The Fabled Fifteen.” From February 1943 through early 1944 the group was aboard Essex steaming into history. One of the first squadrons to equip with Grumman’s new F6F Hellcats, they saw action in attacks on Iwo Jima.

Barrett Tillman, in Hellcat Aces of World War 2, describes the introduction of the Hellcat to the U.S. Navy’s carriers in the Pacific, and the immediate impact it had. Like all of Osprey’s Aircraft of the Aces series, it’s a great reference. The cover depicts McCampbell in his Hellcat, Minsi.

In February 1944, he was promoted to CAG (Commander – Air Group) of Air Group Fifteen. That spring, they went to war aboard USS Essex CV-9. McCampbell commanded the entire Essex air group bombers, fighters, and torpedo planes. He was thirty-four years old. During their tour of approximately seven months and more than 20,000 hours of operations, this group destroyed more enemy planes (318 airborne and 348 on the ground) and sank more enemy ships (296,500 tons sunk, and more than a half million tons damaged and/or probably sunk) than any other air group in the Pacific war. Among the major combat ships sunk was the Japanese battleship Musashi, three carriers and a heavy cruiser. The Fabled Fifteen became one of the most highly decorated air groups of the war.

David McCampbell entered combat on May 19, 1944, leading a fighter sweep over Marcus Island. Three weeks later June 11th, flying near Saipan, he saw a lone Zero come out of the clouds. He turned towards the plane and fired three bursts. The Zero went down streaming smoke, the first in long series of successes for the CAG. He reacted coolly to his first aerial victory, “I knew I could shoot him down and I did. That’s all there was to it.”

As the United States forces prepared for the invasion of Guam and Saipan, the Carrier Task Force steamed west into the Philippine Sea. The desperate Japanese battle plan called for them to launch their strike planes at the U.S. ships, then refuel & re-arm on the Guam and Saipan airfields and hit the American carriers again in a ‘shuttle’ operation. It didn’t turn out that way.

On June 19th, the Japanese launched two large raids of Judys and Vals, escorted by fighters. Other carrier air groups took care of the first raid; Essex’ Fabled Fifteen, under David McCampbell went after the second group of eighty planes. McCampbell started the slaughter at 11:39 by exploding the first Aichi D4Y2 “Judy” dive bomber he spotted. As he darted across to the other side of the enemy formation, evading a gantlet of return fire, McCampbell quickly splashed a second Judy, sped toward the front of the enemy formation to record a “probable” on a third, dispatched the formation leader’s left wingman with a staccato burst, downed the leader with a steady stream of machine-gun bullets, then scored a final kill on a diving enemy craft. In minutes McCampbell had logged five kills and one probable.

There was a second air battle in the afternoon. After shooting down yet another Zero (his sixth for the day!), he became separated from his flight of eight and was returning alone to his carrier, the USS Essex. As his Hellcat cruised at 6,000 feet past Guam’s Orote Peninsula, he spotted two Zeros attacking a Navy S0C seaplane picking up a downed pilot in the water. Diving to the attack, McCampbell shot down one of the two Zeros. Lt. Commander George Duncan, another VF-15 pilot, came upon the scene at that time and got the other. It was McCampbell’s seventh for the day and his ninth in eight days of combat.

During the September 12th-13th strikes on the Philippines, He shot down five more planes, and learned about the capabilities of the ‘Nate’ – a small, open-cockpit monoplane, slow and lightly armed, but highly maneuverable, advanced trainer. McCampbell had bagged two Zeros early in the day and was heading alone toward a rendezvous when a Nate attacked him from above. It pulled out of gun range without damaging McCampbell’s Hellcat, but McCampbell wanted the kill. He dropped his belly tank and put on full WEP but kept losing ground. The Nate’s student-pilot saw his advantage and began an overhead pass; but McCampbell dove for the deck. In his after-action report he noted “1) Nate is even more maneuverable than Zeke. 2) Nate can out-climb F6F at 110-120 knots airspeed. 3) This ‘operational student’ will have no trouble completing the course.” By the end of September 1944, McCampbell had shot down nineteen Japanese planes.

On October 24th, during the Battle of Leyte Gulf, McCampbell, assisted only by Roy Rushing, broke up a large group of Japanese planes headed for Essex, as described above.

In one combat tour, David McCampbell shot down 34 Japanese aircraft. If he had served a second tour, he may very well have exceeded Dick Bong’s total of 40. In recognition of his spectacular accomplishments: leading “Fabled Fifteen,” personally accounting for 34 planes, and for his mission on October 24, McCampbell received the Medal of Honor, presented to him by President Roosevelt.

David McCampbell also received the Navy Cross, the Silver Star Medal, Legion of Merit, and the Distinguished Flying Cross. After the war, McCampbell served in the Navy until his retirement in 1964. Married four times, David McCampbell must have had quite an eye for the ladies. He died in Florida after a lengthy illness on June 30, 1996.

TogetherWeServed highlights the military service history of David McCampbell and other profiles in courage.