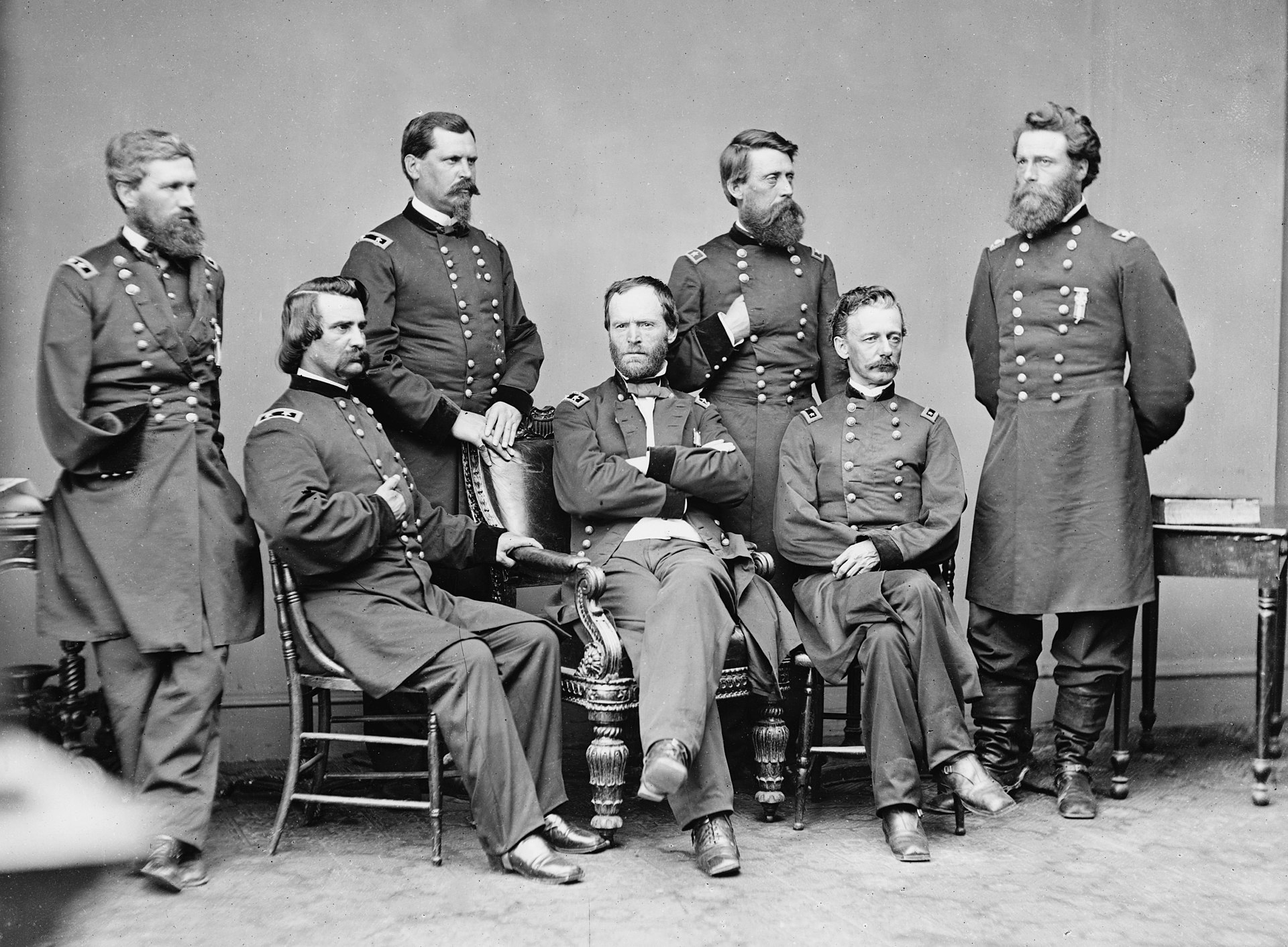 The March to the Sea, the most destructive campaign against a civilian population during the Civil War (1861-65), began in Atlanta on November 15, 1864, and ended in Savannah on December 21, 1864. Union General William T. Sherman abandoned his supply line and marched across Georgia to the Atlantic Ocean to prove to the Confederate population that its government could not protect the people from invaders. He practiced psychological warfare; he believed that by marching an Army across the state he would demonstrate to the world that the Union had a power the Confederacy could not resist. “This may not be war,” he said, “but rather statesmanship.”

General William T. Sherman Prepares For March to The Sea

After Sherman’s forces captured Atlanta on September 2, 1864, Sherman spent several weeks concerned with preparations for a change of base to the coast. He rejected the Union plan to move through Alabama to Mobile, pointing out that after Rear Admiral David G. Farragut closed Mobile Bay in August 1864, the Alabama port no longer held any military significance. Rather, he decided to proceed southeast toward Savannah or Charleston. He carefully studied census records to determine which route could provide food for his men and forage for his animals. Although U.S. President Abraham Lincoln was skeptical and did not want Sherman to move into enemy territory before the presidential election in November, Sherman persuaded his friend Lieutenant General Ulysses S. Grant that the campaign was possible in winter. Through Grant’s intervention, Sherman finally gained permission, although he had to delay until after election day.

After General John Bell Hood abandoned Atlanta, he moved the Confederate Army of Tennessee outside the city to recuperate from the previous campaign. Early in October, he began a raid toward Chattanooga, Tennessee, in an effort to draw Sherman back over ground the two sides had fought for since May. But instead of tempting Sherman to battle, Hood turned his Army west and marched into Alabama, abandoning Georgia to Union forces. Apparently, Hood hoped that if he invaded Tennessee, Sherman would be forced to follow. Sherman, however, had anticipated this strategy and had sent Major General George H. Thomas to Nashville to deal with Hood. With Georgia cleared of the Confederate Army, Sherman, facing only scattered cavalry, was free to move south.

Sherman divided his approximately 60,000 troops into two roughly equal wings. The right wing was under Oliver O. Howard. Peter J. Osterhaus commanded the Fifteenth Corps, and Francis P. Blair Jr.commanded the Seventeenth Corps. The left wing was commanded by Henry W. Slocum, with the Fourteenth Corps under Jefferson C. Davis and the Twentieth Corps under Alpheus S. Williams. Judson Kilpatrick led the cavalry. Sherman had about 2,500 supply wagons and 600 ambulances. Before the Army left Atlanta, the general issued an order outlining the rules of the march, but Soldiers often ignored the restrictions on foraging.

The two wings advanced by separate routes, generally staying twenty miles to forty miles apart. The right-wing headed for Macon, the left-wing in the direction of Augusta before the two commands turned and bypassed both cities. They now headed for the state capital at Milledgeville. Opposing Sherman’s advance was Confederate cavalry, about 8,000 strong, under Major General Joseph Wheeler and various units of Georgia militia under Gustavus W. Smith. Although William J. Hardee had overall command in Georgia, with his headquarters at Savannah, neither he nor Governor Joseph E. Brown could do anything to stop Sherman’s advance. Sherman’s foragers quickly became known as “bummers” as they raided farms and plantations. On November 23rd the state capitol peacefully surrendered, and Sherman occupied the vacant governor’s mansion and the capitol building.

There were a number of skirmishes between Wheeler’s cavalry and Union troopers, but only two battles of any significance. The first came east of Macon at the factory town of Griswoldville on November 22nd, when Georgia militia faced Union infantry with disastrous results. The Confederates suffered 650 men killed or wounded in a one-sided battle that left about 62 casualties on the Union side. The second battle occurred on the Ogeechee River twelve miles below Savannah. Union Infantry under William B. Hazen assaulted and captured Fort McAllister on December 13th, thus opening the back door to the port city. The most controversial event involved contrabands (escaped slaves) who followed the liberating armies.

At Ebenezer Creek on December 9th, Jefferson C. Davis removed the pontoon bridge before the slaves crossed. Frightened men, women, and children plunged into the deep water, and many drowned in an attempt to reach safety. After the march, Davis was soundly criticized by the Northern press, but Sherman backed his commander by pointing out that Davis had done what was militarily necessary.

After Fort McAllister fell, Sherman made preparations for a siege of Savannah.

Sherman’s March to The Sea Ended in Savannah

Confederate Lieutenant General Hardee, realizing his small Army could not hold out long and not wanting the city leveled by artillery as had happened at Atlanta, ordered his men to abandon the trenches and retreat to South Carolina. Sherman, who was not with the Union Army when Mayor Richard Arnold surrendered Savannah (he had gone to Hilton Head, South Carolina, to make preparations for a siege and was on his way back to Georgia), telegraphed President Lincoln on December 22nd that the city had fallen. He offered Savannah and its 25,000 bales of cotton to the President as a Christmas present.

Sherman’s march to the sea frightened and appalled Southerners. It hurt morale, for civilians had believed the Confederacy could protect the home front. Sherman had terrorized the countryside; his men had destroyed all sources of food and forage and had left behind a hungry and demoralized people.

Although he did not level any towns, he did destroy buildings in places where there was resistance. His men had shown little sympathy for Millen, the site of Camp Lawton, where Union prisoners of war were held. Physical attacks on white civilians were few, although it is not known how slave women fared at the hands of the invaders. Often male slaves posted guards outside the cabins of their female friends and relatives.

Confederate President Jefferson Davis had urged Georgians to undertake a scorched-earth policy of poisoning wells and burning fields, but civilians in the Army’s path had not done so. Sherman, however, burned or captured all the food stores that Georgians had saved for the winter months. As a result of the hardships on women and children, desertions increased in Robert E. Lee’s Army in Virginia. Sherman believed his campaign against civilians would shorten the war by breaking the Confederate will to fight, and he eventually received permission to carry this psychological warfare into South Carolina in early 1865. By marching through Georgia and South Carolina he became an archvillain in the South and a hero in the North.

If you enjoyed learning about Sherman’s March to The Sea, we invite you to read about other battlefield chronicles on our blog. You will also find military book reviews, veterans’ service reflections, famous military units and more on the TogetherWeServed.com blog.  If you are a veteran, find your military buddies, view historic boot camp photos, build a printable military service plaque, and more on TogetherWeServed.com today.