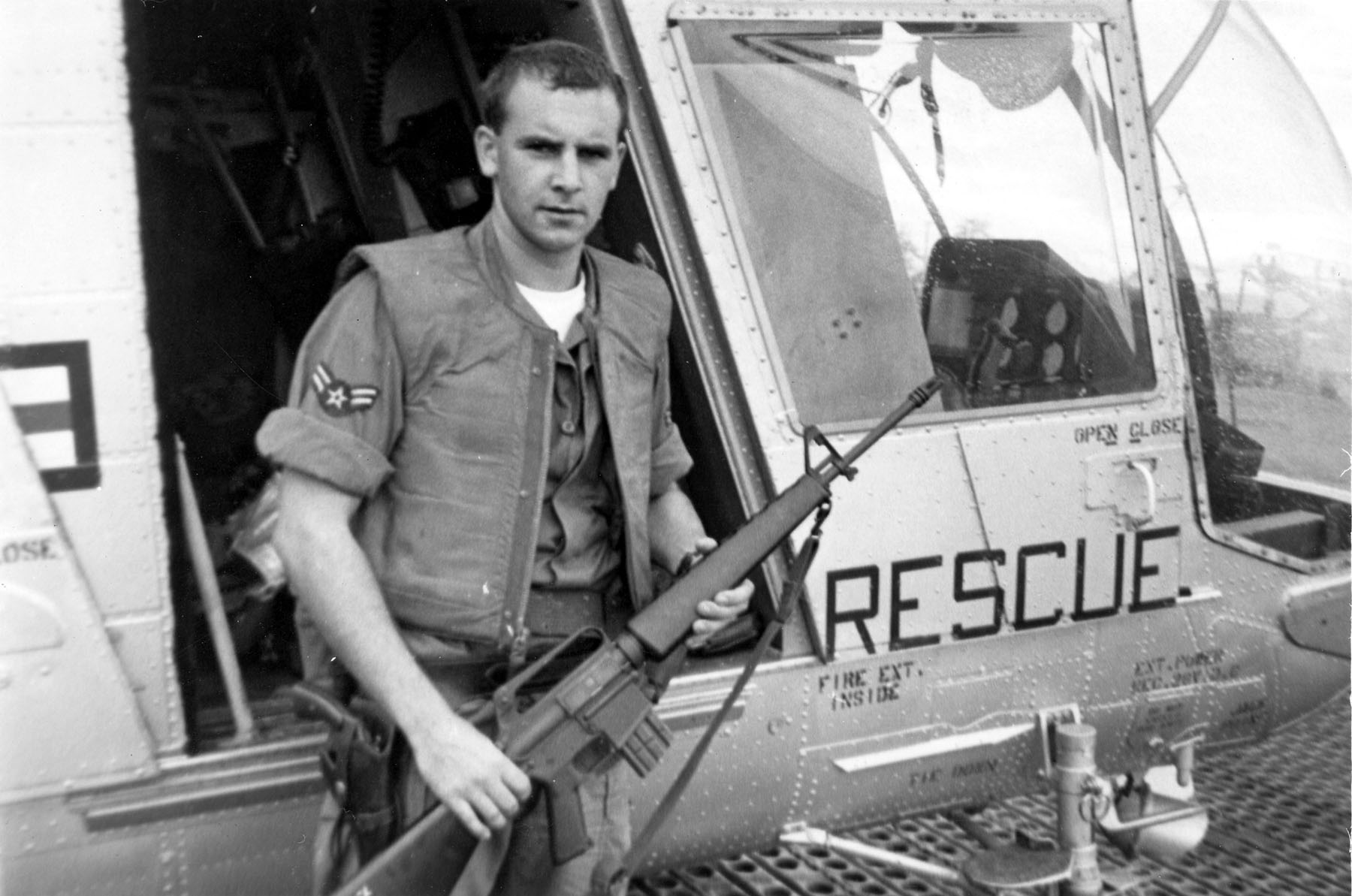 Born in 1944 in Piqua, Ohio, William Hart Pitsenbarger was an ambitious only child. He wanted to quit high school to join the U.S. Army Special Forces’ “Green Berets,” but his parents convinced him to stay in school. After graduating in 1962, Pitsenbarger decided to join the Air Force and on New Year’s Eve 1962, he was on a train bound for basic training in San Antonio, Texas.

During his basic training in early 1963, “Pits” – as he was known to his friends – learned his military skills in a series of demanding schools. After Air Force basic training, he volunteered for pararescue work and embarked on a rigorous training program, which included U.S. Army parachute school, survival school, a rescue and survival medical course, and the U.S. Navy’s scuba diving school. More Air Force rescue training and jungle survival school followed. His final training was in air crash rescue and firefighting.

His first assigned was to the Rescue Squadron assigned to Hamilton AFB California. He was later sent on TDY (Temporary Duty) to Vietnam. Upon completing his first TDY assignment, he volunteered to return and received orders in 1965 to report to Detachment 6, 38th Air Rescue and Recovery Squadron at Bien Hoa Air Base near Saigon. His unit was composed of five aircrews that flew three HH-43F Kaman Huskie helicopters, His commander, Maj. Maurice Kessler called him “One of a special breed, alert and always ready to go on any mission.”

Arriving in Vietnam in August 1965, Pitsenbarger completed more than 250 missions, including one in which he hung from an HH-43’s cable to rescue a wounded South Vietnamese soldier from a burning minefield. This action earned him the Airman’s Medal and the Republic of Vietnam’s Medal of Military Merit and Gallantry Cross with Bronze Palm.

On April 11, 1966, in the thick jungle near Cam My, Republic of Vietnam an infantry company on 134 soldiers from the 1st Infantry Division (the “Big Red One”) was surrounded by a Viet Cong battalion of approximately 500 troops. In a fierce firefight, the North Vietnamese surrounded and pinned down the Americans. As the battle went on, the number of U.S. casualties grew steadily.

Detachment 6 of the USAF’s 38th Aerospace Rescue and Recovery Squadron received an urgent call to evacuate the wounded. Army helicopters could not land in the battle zone because there were no clearings in the tall, dense “triple canopy” forest. The tallest trees rose 150 feet, and a second layer stood at about 100 feet, with a third layer below. Only U.S. Air Force HH-43 Huskie helicopters with cables and winches could hoist the injured from the jungle.

He was the rescue and survival specialist aboard “Pedro 73,” one of the two Huskies on the mission. The Huskies were to take turns hoisting litters with critically wounded patients through the forest canopy and delivering them to a nearby airfield. Pedro 73’s crew, while under fire and hovering in a hole in the forest below the tallest trees and barely large enough for the Huskie, saw that the ground troops desperately needed help loading wounded into the litter. Pitsenbarger volunteered to be lowered to the ground to help. He descended a hundred feet into the firefight with a medical bag, a supply of splints, a rifle and a pistol.

On the ground, he organized and speeded the evacuation, enabling the Huskies to rescue nine soldiers on several trips. Normally, pararescuemen return to the helicopter, but Pitsenbarger chose to stay and help the beleaguered troops. As the fight continued, Pedro 73 was badly damaged by ground fire and forced to withdraw. Rather than escape with the last Huskie, Pitsenbarger chose to stay on the ground and aid the wounded. Soon the firefight grew too intense for the helicopters to return.

For the next couple of hours, Pitsenbarger crouched and crawled through the thick jungle in search of wounded soldiers. He dragged them to the middle of the company’s perimeter, hiding them behind trees and logs for shelter.

The circumstances deteriorated, forcing him to take up arms and fight the Viet Cong for an hour and a half, repeatedly exposing himself to heavy enemy fire while he did his utmost to make improvised splints and stretchers from the surrounding vegetation.

Ammunition running low, he darted around the battlefield, risking life and limb to collect leftover ammunition and distribute it to those still fighting. He sustained three wounds doing this and ignoring his wounds, he kept on fighting.

He did his utmost to repel the attack and treat the wounded until the American perimeter was finally breached. In the early evening, he took four shots while on his way to treat another wounded man, with the fourth hitting him between his eyes and killing him instantly.

The Viet Cong withdrew during the night and in the following morning, U.S. forces were able to recover survivors and the fallen. It was found that Charlie Company had suffered 80 percent casualties.

Pitsenbarger is the 59th Medal of Honor Recipient

For coordinating the successful rescue efforts, caring for the wounded and sacrificing his life while aggressively defending his comrades, William Hart Pitsenbarger received the Air Force Cross on June 30, 1966. After review, the original award was upgraded, and on Dec. 8, 2000, the Medal of Honor was presented to his family in a ceremony at the U.S. Air Force Museum. Airman Pitsenbarger is the 59th Medal of Honor recipient, and sixth enlisted recipient, from the U.S. Air Force and its predecessor organizations.

William Hart Pitsenbarger was only 21 years old when he was killed in action. But in his short life and valorous Air Force career, he was an example of dedication, compassion, and tenacity for all those with whom he served especially on his final mission, Airman 1st Class Pitsenbarger embodied the Pararescueman’s motto: “That Others May Live.”