WW2 – The Battle of Saipan 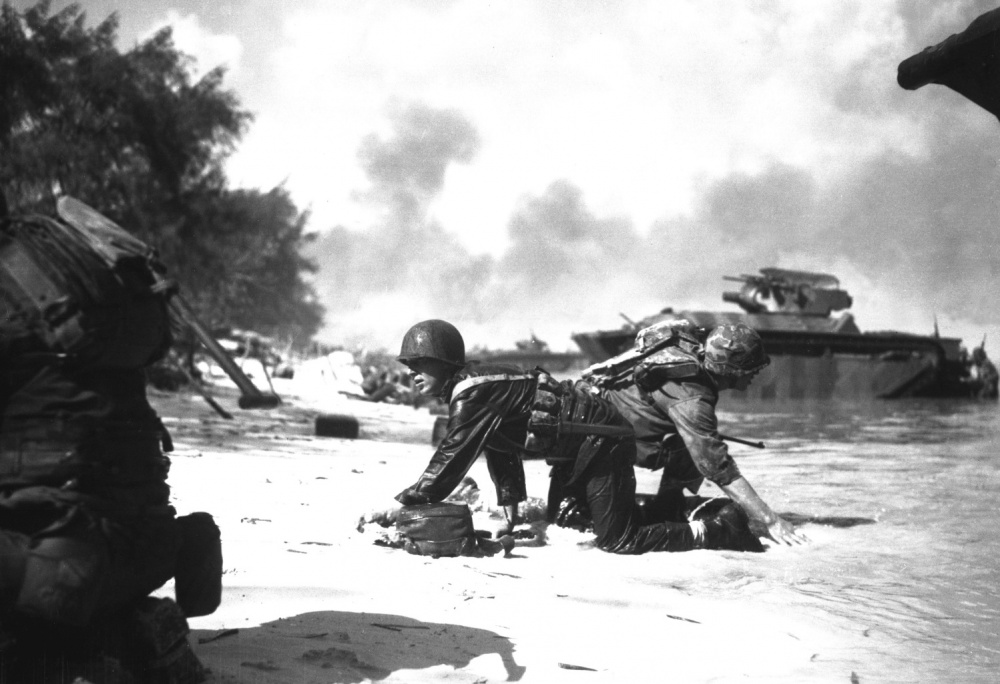 War inevitably equals mass casualties, whether numbering in the dozens or the hundreds, or the hundreds of thousands – this truth that has accompanied war for thousands of years. A generally accepted fact is that these casualties, whether civilian or military, are usually the direct result of enemy soldiers attacking, disease, and famine in the wake of an invasion. Sometimes, however, other means account for mass deaths in war. Such was the case of the Battle of Saipan in the Second World War when it became apparent that Americans would take the island. Around one thousand Japanese civilians – men, women, and children, old and young – tragically chose to take their own lives rather than surrender.

The Beginning of The Battle of Saipan

The Battle of Saipan began on June 15, 1944, when around 8,000 US Marines landed on Saipan’s island on the first day of the invasion. Naval bombardment of the island had started two days earlier on the 13th and had some effect in weakening Japanese defenses. Still, no amount of shelling could shake the Japanese soldiers’ resolve.

As soon as the Marines started their amphibious landing, they were met with ferocious resistance from soldiers who had been conditioned to do only two things: win or die. The fighting was intense, with every inch of territory on the 185 square kilometer island that was wrested from Japanese control being won at the expense of many American lives.

The Americans had learned many lessons from their earlier invasions of the Japanese-controlled islands of Tarawa, Kwajalein, and Eniwetok, and they put this knowledge to use on Saipan. As hard as the Japanese fought to repel the invaders, the US Marines fought with equal fervor and grit, determined to take the island.

The ferocious fighting saw acts of brutality on both sides. Owing to the island’s topography, with its many mountains and caves, retreating Japanese troops could take cover in ravines, cliffs, and caves and use them to ambush the Marines, often with devastating results.

In retaliation, Marines took to clearing out caves with flamethrowers, sometimes not checking first to see if they were occupied by Japanese troops or Japanese civilians, of which there was a sizable population on the island. The Japanese soldiers exacerbated the problem of getting noncombatants killed by deliberately using civilians as decoys in their ambushes.

Emotions were running high on both sides as the Battle of Saipan progressed.

After a few weeks of fighting, it was obvious that the Japanese had lost the battle. By the end of June, the remaining Japanese forces and civilians had been corralled into the island’s northern tip.

Most other nations, in such a position, would have surrendered at this point. Not the Japanese, though. Emperor Hirohito, who the Japanese revered as a demi-god, issued what was to be a tragically fateful imperial order when word reached him that Saipan was sure to be lost.

The order stated that all Japanese citizens – soldiers and civilians alike – on Saipan were to commit suicide rather than surrender to the Americans. To the average Westerner, raised in a secular nation, such an order would seem utterly insane.

However, WWII-era Japanese were raised in a culture in which ritual suicide was a perfectly acceptable, rational means to avoid dishonor, reverse disgrace, and restore disrupted social order. The concept manifested itself in wartime Japan through kamikaze and banzai attacks against their enemies, as well as seppuku suicides by officers who lost battles, which was called kakuro no jisatsu (“suicide of resolve”).

Accordingly, Lieutenant-General Yoshisugu Saito ordered all the remaining Japanese troops on the island to amass and die in honor of the Emperor, in a mass banzai charge at the American forces.

In what was to be the largest banzai charge of the entire war, 4,000 Japanese troops – with the most able-bodied at the front, down to the sick and wounded at the rear, hobbling or limping along without weapons, along with a number of civilians carrying improvised bamboo spears – engaged the American Marines and Army forces in a suicidal frontal charge.

The ensuing battle lasted fifteen hours, and almost all of the Japanese troops were killed – but not before they killed or wounded 650 American soldiers. The banzai charge took place on July 7, and on the 9th, Admiral Turner made the announcement that Saipan was officially in American hands.

Saito and the other senior Japanese officers who remained committed seppuku in a cave with their swords. After a month of fierce fighting, the American troops, weary of battle, though it was finally over. However, there was no relief from killing and brutality for the Americans, though – indeed, some of the worst horrors they would witness lay ahead.

Not only had the revered Emperor Hirohito ordered the civilians to commit shodan jiketsu (“mass suicide”), but the Imperial Japanese Army had also spread terrifying propaganda about what would befall Japanese civilians should they fall into American hands. According to the propaganda, they could expect to be raped, tortured to death, or even cannibalized by the savage enemy.

As the Americans pressed onward after their military takeover, the remaining Japanese civilians started to put the emperor’s fateful order into action.

Many suicides took place at Marpi Point, at the northern tip of the island. Here, hundreds of people jumped to their deaths from two high cliffs – later named Suicide Cliff and Banzai Cliff. Entire families leaped to their death. Sometimes the parents would slit their children’s throats before throwing them over the edge and then following them to their doom.

Other individuals and families simply walked into the ocean until the waves swallowed them. Other groups huddled together around grenades they obtained from Japanese soldiers, with one person pulling the pin.

In a desperate attempt to stop the senseless deaths, American troops got captured Japanese civilians to shout out to their compatriots over loudspeakers, assuring them that the Americans would treat them kindly if they surrendered and give them food and shelter.

Some chose to surrender after hearing this, but others remained stubbornly steadfast in their fanatical commitment to their emperor and took their own lives – and the lives of their loved ones – regardless.

Meanwhile, out at sea, US naval forces decimated the Imperial Japanese Navy, sinking three aircraft carriers along with the hundreds of aircraft on board. Any hopes that the Japanese troops may have had for relief were dashed.

There is no official count of how many civilians took their own lives at the end of The Battle of Saipan, but estimates usually range from 800 – 1000 civilian deaths by suicide. It was one of the many great tragedies of a war that was marked by mass deaths of combatants and non-combatants alike.

Today, the mass suicides have become a place that many Japanese visits on a pilgrimage to console the souls of the dead. Local islanders say that no white birds lived on the cliffs prior to the war, but now they are full of flocks of them – and each white bird, they believe, represents the soul of a person who tragically lost their lives there.

If you enjoyed learning about the Battle of Saipan, we invite you to read about other battlefield chronicles on our blog. You will also find military book reviews, veterans’ service reflections, famous military units and more on the TogetherWeServed.com blog.  If you are a veteran, find your military buddies, view historic boot camp photos, build a printable military service plaque, and more on TogetherWeServed.com today.