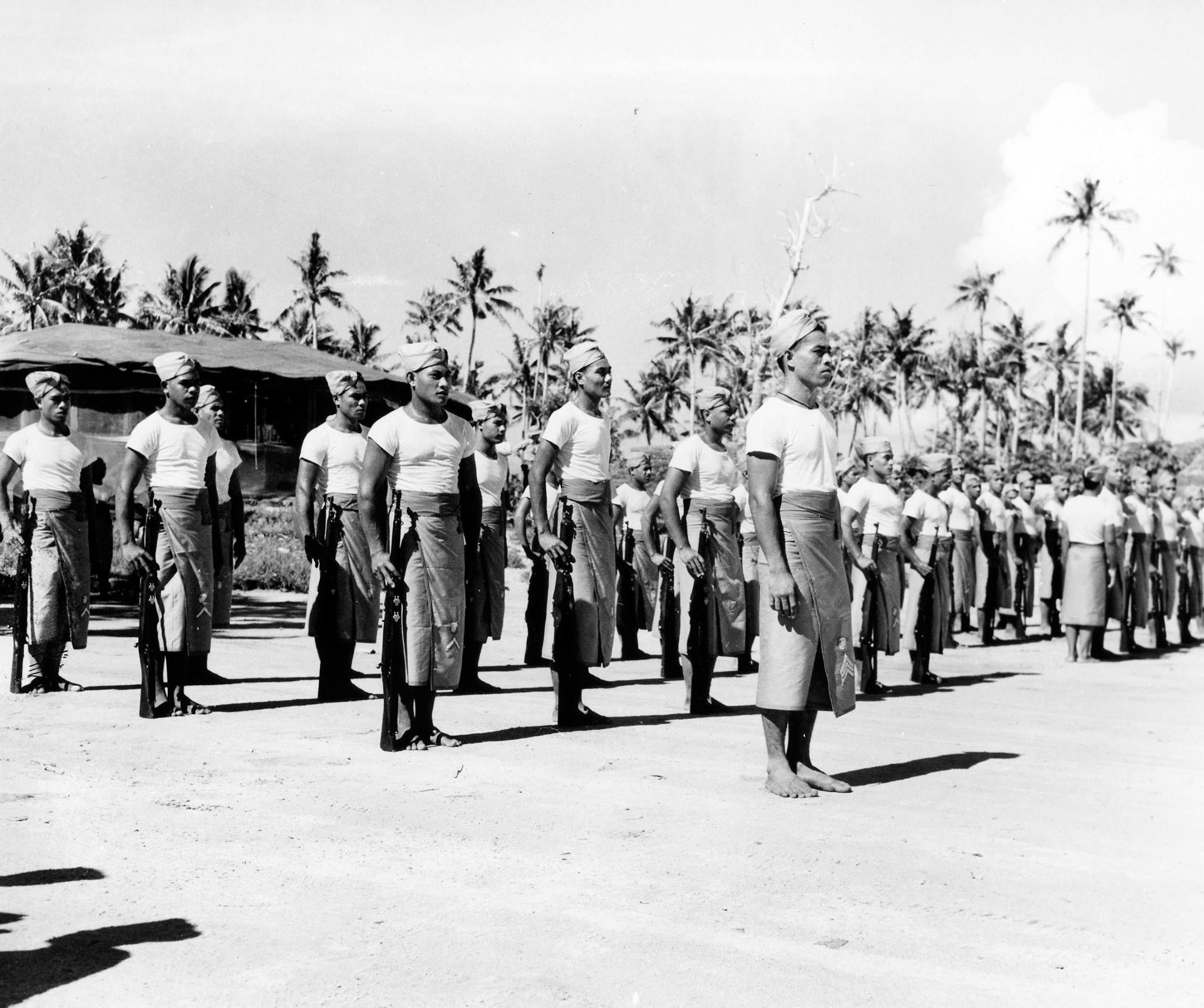 World War II as a global event unfolded over more than a decade, impacting countries in different ways and at very different times.  Undoubtedly Americans identify the war’s start consistently with the Pearl Harbor attack and declaration of war by Japan on December 7, 1941, but the beginnings of the conflict date much earlier to 1931 with Japan’s invasion of Manchuria.  In recognition of their brutal ambitions and the escalating political activities in Europe the US became deeply immersed in war planning and preparations beginning early in the 1930s.  But, with an overwhelming isolationist stance gripping the US and a resulting lack of Federal funding those actions identified by the military as critical to national defense had to be deferred.  Only with tensions heightening around Japan and the outbreak of war in Europe during 1939 was President Roosevelt able to declare a limited national emergency, and in doing so, appropriate meager funding.

The Marine Corps hurriedly formed long-sought defense battalions.  One such unit, the 7th Defense Battalion, was deployed to Samoa in February 1941, making it the first US Marine force to ever operate in the South Pacific.  Frenzied and facing both shortages of manpower and competing priorities in war preparations the 7th Defense Battalion was granted authority in May to form the first native reserve battalion, 1st Samoan Battalion USMC.  These Barefoot Marines were activated July 1,1941, and were fully expected to defend their beaches at any time facing down an invasion by the Japanese.

War planning conducted throughout the 1930s contemplated aggression from different sources with color-coding to distinguish planning documents, Plan Orange representing Japan.  By 1936, one outcome of this planning was a recognition of the need for five defense battalions (nicknamed the Rainbow Five due to color-coded war plans) deployed across strategic US holdings in the Pacific: Pearl Harbor, Wake, Midway, Johnston and Palmyra Islands.  Charged with responsibility for the defense of all Pacific naval bases the Marine Corps concluded that Guam could not be defended and, by manning the Philippines, the Army became accountable for its defense.

In contrast, Samoa was viewed as indispensable in the chain of communications linking the US (West Coast), Australia, and New Zealand, making it essential to hold the line against the Japanese extending from Midway to Samoa, Fiji, and Brisbane.  So, by late 1941 the newly formed Defense Battalions were deployed but many battery emplacements were incomplete and much of the antiaircraft artillery and other weapons had not been unloaded from ships, including Pearl Harbor.  As foreseen in war planning, Pearl Harbor and Midway were attacked on December 7th, Wake Island, Guam, and the Philippines on December 8th.  Guam and Wake Island fell to the Japanese on December 10th and 23rd, respectively, with the ultimate fall of the Philippines on May 8th, 1942.

The South Pacific islands are oftentimes misleading by their titles.  Islands can actually be atolls, coral outcroppings, or island chains (some inhabitable and others not) and Samoa is no different.  Samoa is, in fact, a collection of islands comprised of Western Samoa that includes two main islands (Savai’i and Upolu), two smaller inhabited islands (Manono and Apolima), and several smaller uninhabited islands.  Immediately east of Western Samoa lies American Samoa that once again is a collection of islands.

In February 1941 the 7th Defense Battalion occupied Tutuila, the largest island in American Samoa and home to the capital, Pago Pago.  Following the assault on US Pacific bases in December 1941, there was recognition that Western Samoa was vulnerable to occupation by the Japanese and enabled direct assault on American Samoa.  This belief was fueled by the construction of an airfield on Tutuila, completed in three months’ time on a 24×7 schedule and making it a priority target.  Accordingly, troops of the 7th Defense Battalion not already consumed by construction on neighboring territories were rapidly deployed to all islands in the group.

For the three hundred fifty men of the 1st Samoan Battalion their first taste of combat came on January 11, 1942, when a Japanese submarine surfaced at 2:30 am just off Tutuila.  The submarine shelled the naval base for approximately seven minutes, submerged and disappeared into the darkness having inflicted only minor damage and wounding two marines.  Onshore tensions ran high for an extended period, unsure if this was the beginning of an invasion by the Japanese.  But this was, in fact, the only direct attack on Samoa and it was later suggested that Japanese war plans never contemplated incursion that far south.  However, it is more likely that the Battles of the Coral Sea (May 1942) and Midway (June 1942) blunted Japanese ambitions and ensured that Samoa did not become a battleground.  Instead, most units deployed to the South Pacific were routed through Samoa, making it the largest base and training center in the Pacific, eventually teaming with more than 10,000 troops.

The Brave Men of the 1st Samoan Battalion

The most distinguishing characteristic of the men comprising the 1st Samoa Battalion was their uniform.  Scantily clad by any military standard the dress attire consisted of a khaki summer garrison cap, a simple white t-shirt, a khaki ie lavalava bordered in red and featuring an embroidered Marine Globe and Anchor emblem with rank chevrons.  Enlisted men were armed with M1903 Springfield rifles and carried M1923 cartridge belts to complete the uniform- no footwear.  Fashioned after traditional native garb, the uniform was intended to be welcoming for new recruits while meeting the functional needs of a jungle environment.

By February 1944 the war in the Pacific had moved significantly north to the Marshall Islands (Kwajalein and Eniwetok) and west to the Marianna Island chain (Saipan, Guam, and Tinian).  With US forces unilaterally advancing across the Pacific Theatre orders were given to dismantle the war effort in the Samoa Group.  By the summer of 1945 the naval base had reverted to its peacetime status as a permanent base including anchorage facilities, fueling station, repair depot and weather station.  Likewise, the 1st Samoan Battalion was disbanded and the men returned to civilian life, however, changed by their wartime experiences.  In 1941, undermanned and with little training it was recognized the unit could at best defend against a small raiding force, but would not be detoured.  American Nationals with no obligation to serve, every man was a volunteer.  And for one desperate moment in time these brothers stood together in defense of their homeland and one another, leaving their fingerprint on history and those who would come after them.